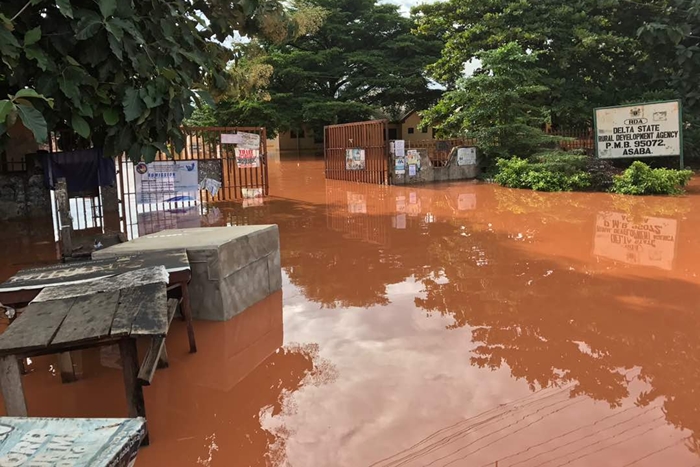 The Delta State Government has taken short and long term measures in its determination to tackle the flooding problems in the state capital and other parts of the state.

A statement signed by the Media Assistant to the State Commissioner for Information, Mr. Sam Ijeh, stated that as part of the short term measures to ameliorate the effects of flooding in the state, old canals have been cleared and are still being cleared,  while new ones have been created in flood prone areas in the state.

Existing canals in Koko, Agbor, Ughelli, Sapele, Agbarho, Anwai Camp 74, Warri as well as other towns have been cleared to ensure free flow of water.

According to the statement, regular disilation of drains along Okpanam Road and the Core Areas, the creation of ‘catch pits’ in strategic locations (i.e. Delta Broadcasting Service (DBS), Asaba, front of old Secretariat and Airport View, off Okpanam Road) are also part of the short term measures to put the menace in check.

The Ministries of Lands, Surveys and Urban Development and that of Environment are tackling the issues of buildings erected on natural waterways and appropriate action will be taken not long from now particularly in the state capital territory.

The statement explained that the Nigeria Society of Engineers (NSE), Delta State chapter, is collaborating with state government in finding a lasting solution to the menace in the state, especially Asaba and environs, in addition to the engagement of a Storm Water Consultant, Jefcon Consultant, to tackle the problem.

As a long term measure, the state government in May this year, reviewed the scope and cost of the continuation and completion of the construction of Storm Water Control in Direct Labour Agency (DLA) Road/Jesus Saves Corridor, Asaba.

Work on the project will commence immediately the rains subside as advised by the contractor that will handle the project, CECC, who opined that some buildings in the area might cave in if the work is started during the rain.

Recall that the Nigerian Meteorological Agency (NIMET) had earlier warned that 16 states of the federation, including Delta, will experience heavy flooding this year.

This prompted the state government to embark on serious sensitization to inhabitants of the state living in flood prone areas to move to safer grounds to avoid negative consequences and desist from throwing refuse into the drains.

The statement said that the state government is doing its own part of the bargain by providing good governance and it is expected that the citizens should reciprocate by supporting the government.