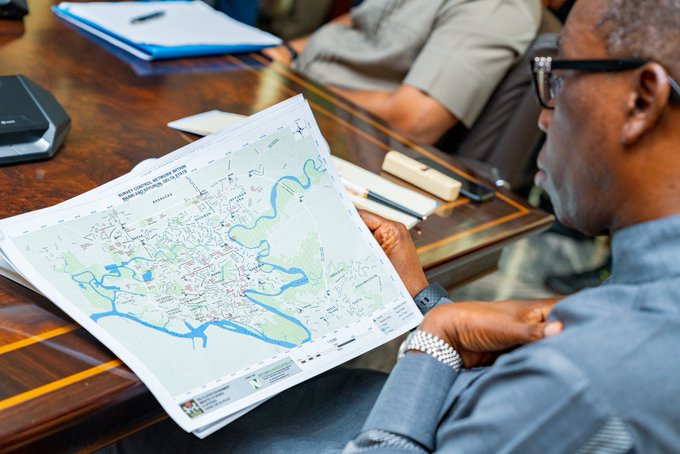 …As Governor Okowa Tasks Officials On Sites Visit Before Approving Construction of Buildings.

Delta State Governor, Senator Dr Ifeanyi Okowa, has warned officials of the Ministry of Lands and Surveys to avoid issuing building approval certificates to property developers without visiting such sites to know whether they are on road or water ways.

According to the governor, any official of the Ministry who engages in such action will face sanctions as his administration has set out to demolish structures on the waterways, especially in Warri, Uvwie and environs.

He spoke on Monday, August 5, 2019 in Asaba when he received the Final Preliminary Report Of The Committee To Study And Advise Government On Measures Required To Tackle And Control Flooding Of Effurun/Warri And Its Environs In Delta State.

“There is a lot of challenges if we are to ensure that the water will be properly discharged from our towns and cities; it is more disturbing during the rainy season; our planning department needs to do it right because, for any building that has no building plan will be pulled down.

“Henceforth for any building plan for approval, those who are in charge of the approvals must go to site; people must be alive to their duties and not just sit in their offices and approve building plans because, for our people who are building on natural waterways, the structures will be pulled down.

“If there is any marked building, the people must stop the construction and it must be enforced; It is our desire to reduce the level of flooding in Warri, Effurun and its environs, what we are doing in Warri, Uvwie and environs is as a result of issues raised during the townhall meetings and as a state government we are committed to starting the project.

Delta State Governor, Senator Ifeanyi Okowa (right) receiving the Final Report of the Measure Required  to tackle and control Flooding in Effurun/Warri and its Environs from the Commissioner for Works, Chief James Augoye, during a presentation to the Governor, in Government House Asaba.

“We are going to hold proper stakeholders meeting because, from what I see, the property on the waterways are much and we have to bring them down; flood has chased people out of their houses and we have to get it right for our people,” he said.

Earlier, Engr. John Onwualu had in his presentation, observed that “large part of the flooding in Warri, Uvwie and environs is caused by blocked drainages, overgrown weeds on water channels, and developers building on the waterways, otherwise, there are natural waterways in the area.”

He noted that 101 flood prone areas and 13 natural courses have been identified in the area.

Some of members of the committee include, Engr. Joe Omatsola, Chief Emmanuel Okumagba, among others.