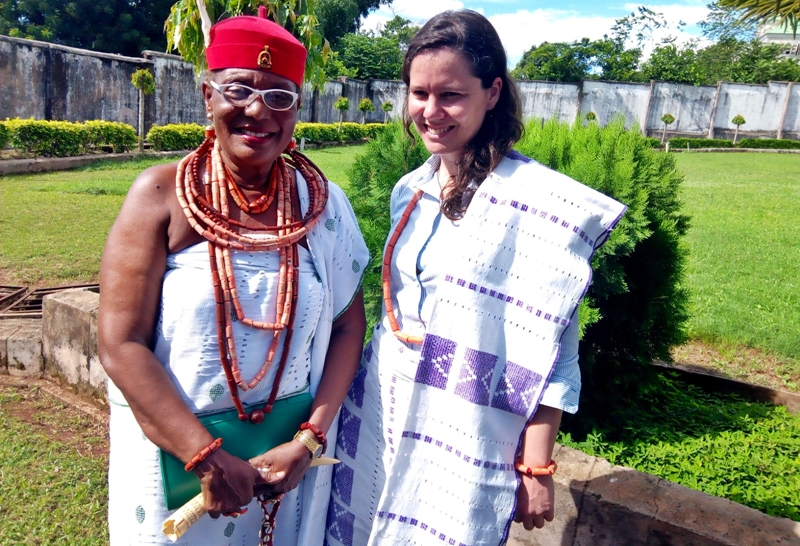 …As Omu Commends EU For Funding Niger Delta Dialogue, Other Key Issues In The Region.

The European Union’s Team overseeing the Niger Delta questions has visited the palace of Her Royal Majesty, Obi Martha Dunkwu, the Omu of Anioma in Okpanam community of Oshimili North LGA, Delta State, to elicit evaluation of some of its programmes and also seek greater collaboration for better services in the Niger Delta.

The Team was led by a French woman in-charge of Governance, Peace Building, Artisanal Mining, Monitoring and Evaluation, Ms. Cecile Collin, accompanied by Dr. Mizan Siddiqi, a Public Health Expert and of course, Prof. Dele A. Sonubi who is in-charge of Stability Efforts of the EU.

She appreciated Omu Dunkwu for her several assistance to the EU in aiding some of its programmes in the Niger Delta to success, especially the all important Niger Delta Dialogue.

According to Cecile Collin, “We find Omu Martha Dunkwu, the Omu Anioma as a strong voice in the Niger Delta from the reports at our disposal. We are glad that we have such a brave, brilliant, strong and cerebral woman in the traditional institution who finds time to speak for peace and reduction of violence in the Niger Delta.

We are here critically, to have our programmes evaluated through the Omu Anioma. We want to know from critical stakeholders like the Omu, what the EU has done well in the Niger Delta, how well it is currently doing and what needs to be done going forward.

This is to help the EU’s activities become more useful with specific results and impacts. So, having found Omu Anioma worthy of this task, we have come to hear her recommendations too, to strengthen up for better programme services and to avoid potential mispositions and misrepresentations”, she stated.

Responding, Omu Dunkwu appreciated the EU Team for the visit, describing it as one in a million.

She commended the EU for funding the Niger Delta Dialogue which she has severally chaired, maintaining that so far the programme has remained a huge success. She gave example of a case at hand in Rivers and Bayelsa States, where the activities of young women during the 2019 elections, disarmed the military from interfering in the elections, rendered all intending violent missions to naught and helped to reduce violence drastically in those flashpoints.

The British and American trained Omu Anioma, asserted that while the EU programmes in the Niger Delta had remained successful, she however advised, that the EU must adequately harness the disposition of the media to reach the greater audience of the Niger Delta populace, towards appreciating the great efforts the EU is making in the region for peace and non violent approaches to politics and development.

Omu Anioma affirmed that the women of the Niger Delta had been well sensitized to play responsible roles in politics, governance and family. She therefore, suggested to the EU to put more effort towards mobilizing the men and male youths for mentoring in leadership and appreciating that women are not in competition with them but to contribute their quota in advancing the course of humanity.

She posited that over the years the EU’s health programmes had not been adequately successful, because of the ignorance of the men to key in and appreciate the fact that the lives of their wives, born and unborn children are important to family and societal advancement.

On this note, Omu Dunkwu appealed to the EU to do more in the area of educating the woman both formally and informally.

According to her, “The education of a woman is very important for progress and the success of EU programmes, especially in health related matters. As the knowledge of a woman increases, the more she thinks of her health, her relationships, her children and her productivity.

Only education (knowledge) can improve healthcare services, such as the ones coming from the humanitarian efforts of EU. Education can make a woman to be a better wive, a better mother and better friend of society. It will help them know their rights and diplomatically disagree with their husbands when they want to uphold harmful traditional practices that affect women. Once ignorance is removed, most of your health programmes will succeed”, Omu Anioma explained.

The vote of thanks on behalf of Omu Anioma was delivered by the Omu of Obior, Her Royal Majesty, Omu Onyebuchibe Okonkwo, who joined Omu Dunkwu to receive the EU delegation on the courtesy visit to Omu Anioma.

She commended them for their effort towards non violent Niger Delta and advancement of humanity, thereby praying to God to continually replenish them as they carry out their assignment for the good of the world and its inhabitants.

At the end of the visit, the EU Team was conducted round the Omu Anioma  Palace ground for sight seeing. They were exceptionally happy and promised to continue to reach out to the Omu with a view to learning more from her and collaborating further in areas of advancing humanity and culture.