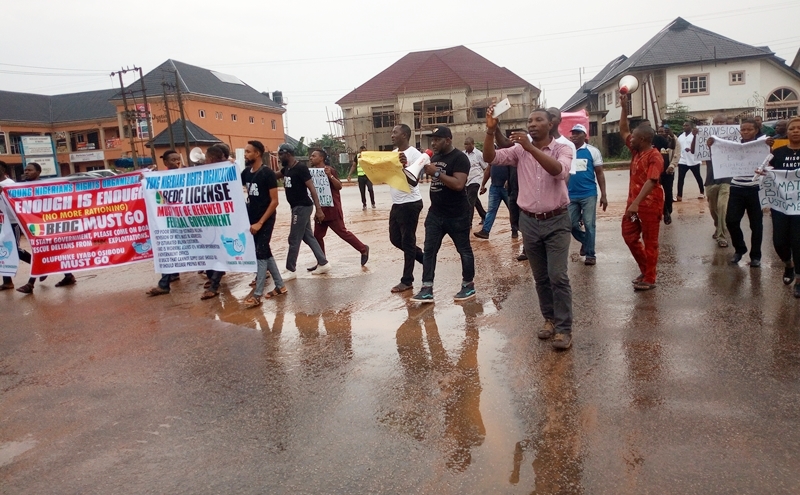 Amidst heavy rainfall, residents of Asaba under the aegis of Young Nigerians Right Organization on Wednesday, July 10, 2019 trooped out ignoring the directive of the Delta State Police Command, and embarked on a peaceful protest against poor services of the Benin Electricity Distribution Company (BEDC) across some streets of the capital city.

The command had unsuccessfully attempted to stop the protest on the ground that it might be hijacked by cultists to cause mayhem in the capital city.

But the protest which commenced with the mobilization of residents to the Inter Bau flyover was generally peaceful.

The placard bearing protesters marched through Anwai road, and had a brief stop over at the Asaba office of BEDC before marching to Government House where they were addressed by Governor Ifeanyi Okowa’s Chief of Staff, David Edevbie.

Inscriptions on some of the placards include ‘Funke must go’, ‘God said let there be light and BEDC said there must be darkness’, ‘Provision of meters must be addressed’, ‘Stop estimated billing’, ‘Bonsaac community donated transformer to BEDC, Funke refused to give approval for installation’, ‘BEDC is incompetent company, therefore, its license must not be renewed’, among others.

Coordinator of the rights group, Victor Ojei who led the protest lamented the lack of electricity in Asaba and its environs, saying that BEDC lacked the capacity to deliver on its mandate.

He said the company has continued to extort consumers with outrageous estimated bills for non-supply of electricity, and called on the Federal Government not to renew the company’s operational license.

Ojei added that BEDC has deliberately refused to maintain facilities which it inherited from the defunct Power Holding Company of Nigeria (PHCN), pointing out that consumers now take it upon themselves to fix faulty BEDC equipment or even provide new ones.

Another leader of the protesters, Kingsley Okpuno stated that residents of Asaba and its environs were now suffering as a result of the poor services of BEDC, lamenting that the development has provide disincentive for artisans operating in the metropolis.

Okpuno said communities have resorted to self help by contributing to provide transformers, lamenting however that BEDC refused to install such transformers on grounds of accumulated bills.

He said the people have resigned to fate by buying fuel at high cost on a daily basis to power their generators.

Addressing the protesters, Edevbie assured that their grievances will be channeled to the appropriate quarters for action, and advised to remain law abiding in their activities.

Meanwhile, the Head of BEDC in Delta State, Fidelis Obishai had at the peace meeting convened by the state police command, assured that the company will investigate allegations of extortion, and urged consumers to pay bills in order to get improved services.