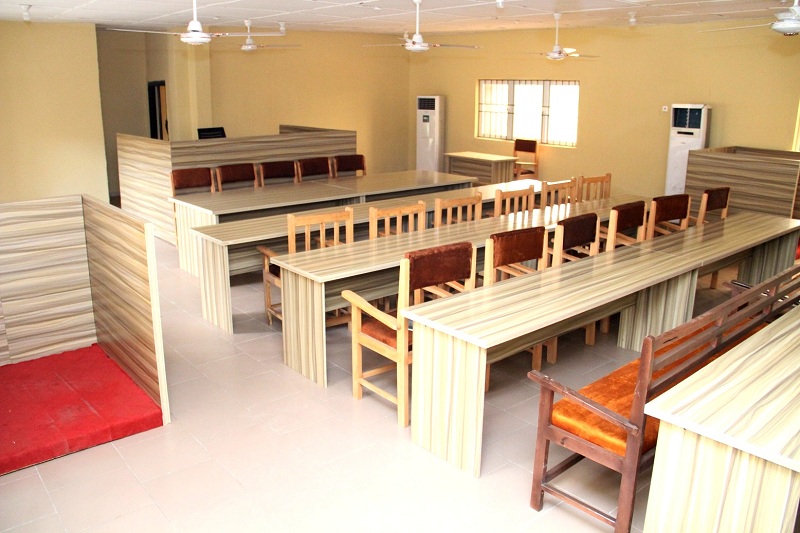 Delta Government on Tuesday, February 9, 2021 unveiled the rebuilt High Court Complex in Asaba burnt down during the ENDSARS protests in 2020.

The State’s Chief Judge, Justice Marshal Umukoro, who unveiled the complex, announced that court processes would resume at the complex along Ibusa Road, on Monday.

Conducting journalists round the rebuilt court, Umukoro commended Governor Ifeanyi Okowa for his commitment to speedy dispensation of justice.

He said that the governor’s intervention was timely because after the destruction of the complex, dispensation of justice was delayed for some months.

“You will recall that on October 22, 2020, some hoodlums invaded the High Court Complex in Asaba and razed it down.

“We thank God for Governor Ifeanyi Okowa, who within 48 hours visited the court complex to see things for himself. He supported us morally and financially to rebuild this complex.

“The contract was awarded on November 20, 2020. We thank God that we are here today; this is true restoration as you can see for yourself.

“We are happy and we thank the governor for this milestone and we appreciate the media that gave us the full coverage.

Front View of the Rebuilt High Court Complex along Ibusa Road, Asaba, Tuesday, February 9, 2021 which was destroyed during a the EndSARS protest in October 2020 along Road, Asaba. (Pix: Jibunor Samuel).

“After the vandalism, we were constrained to relocate our four Judges to our buildings in Ibusa. But on the 15th of February, Courts 2, 3, 4 and 5 will relocate back here,” Umukoro stated.

The Chief Judge cautioned youths to refrain from destroying public buildings as monies spent in rebuilding the court complex could have been used to develop other infrastructure.

“I am happy that we are seeing this new building now after it was razed down during the ENDSARS protests and I thank God that the governor came to our rescue,” she stated.

In his remarks, the Commissioner for Information, Mr Charles Aniagwu, said that the destruction of the high  court complex was one of the dark sides of the ENDSARS demonstration.

He said the Okowa’s administration was committed to speedy dispensation of justice, adding that the administration believed in some of the demands made by the ENDSARS protesters.

“The Okowa administration believed that some of the demands made by the ENDSARS protesters were some of the things that needed to be done for our country to move forward.

“Unfortunately, in the course of that protest, we were quite convinced that hoodlums who were not on the same page with the ENDSARS protesters came in and destroyed a number of things in our capital city and this our high court complex is one of the things that were destroyed.

“What you have seen today is also another virtue that we have demonstrated as a government to be able to respond to challenges and we must appreciate the Chief Judge and his team for being able to operationalise the intentions of the Governor in less than three months.

“The contract for the renovation of this court was awarded barely two and half months ago and today you are seeing the beauty of what Delta represents – ability to respond and respond in good time.

“The Governor is committed to bringing back the courts because it is the responsibility of the executive to enforce the law but you can’t enforce the law without having the judiciary properly adjudicating and letting you understand the roles and the rules that governs the enforcement,” Aniagwu stated.