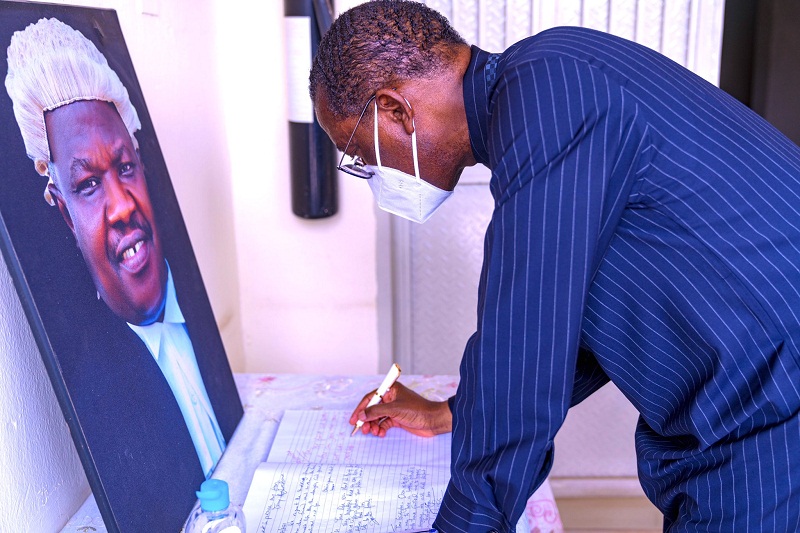 Delta Governor, Senator Dr Ifeanyi Okowa on Tuesday, February 9, 2021 described the death of the Majority Leader of the Delta State House of Assembly, Mr Tim Owhefere, as shocking and devastating.

The governor, who lamented the demise of the legislator when he visited the family on condolence at the Legislative Quarters, Asaba, said the visit was very difficult for him to undertake, “because in Tim, I have lost a good friend and brother”.

He said that the deceased, representative of Isoko North at the Assembly, was a great lawmaker who assisted him a lot in ensuring the unity of the House and in the passage of executive Bills.

The governor appealed to the family members, constituents and colleagues to accept the passing away of the lawmaker by taking solace in the fact that he lived a life of great accomplishments.

“He had sent a text message to me when he entered the ICU, saying ‘pray for me because I know when you pray for me, I will not die’

“I prayed for him and sent a message of encouragement but there was no response. I was discussing his issue with the Chief Medical Director of the hospital not knowing that my dad had passed on two hours after Tim.

“For my dad, he lived well and died at 88, but for Tim, he was still very strong and still had a lot to do, particularly in the government of Delta because beyond being a friend, many can attest that he was a stabiliser in the Delta State House of Assembly.

“I have lost a true friend and as a state, we have lost one of the best legislative brains. But no matter how much we miss him, the pain in the family is worse, but can we truly question God?

“He came into this world and made his very strong impact within the family circle, his home and his constituency and made a strong impact in the state. He had friends across the state and he contributed his quota to the development of the state.

He urged every mourner to be consoled “because life is like a market where people come in and go out. I have come to appeal to you to look up to God who is able to fill the gap. It can be very painful at the beginning but with time the pain heals.

“It is not easy to replace or replicate somebody like Tim because he had his own special ways. He lived a good life and he left a very warm relationship with people and we have so many good stories to tell about him.”

Responding on behalf of the family, Chief Solomon Ukpore thanked the Governor for his assistance to the late lawmaker.

“I welcome you to the family. Tim always spoke glowingly of the love you had for him; he indeed described you as his destiny-helper and the family appreciates you for that.

“He was the star of the family as the family depended on him, and it is no doubt an irreparable loss but as Christians we have been admonished not to mourn like the heathen,” he stated.

In a related development, the Governor also paid a condolence visit to the family of late Second Republic Senator, Obi Nosike Ikpo, who passed on recently at 88.

Okowa said that the late Ikpo was a well known father in Delta and a well-groomed politician, who never stopped giving advice to those who sought it.

“In the course of my political career, I depended on his advice on several occasions and he is one of my inspirational figures in the Anioma nation and we thank God for his life.

“Beyond politics, he was a father figure in Delta and Anioma. He lived a good and fulfilled life and we thank God for the age he lived up to.

“We pray that God will fill the gap that he has left because no matter how old a man is, the children will always feel the pain.

“He lived a life of positive impact and he contributed his quota to our nation, Nigeria. As a state government, we recognise the role he played and I assure you that we will be part of the burial.

“He has left very indelible prints in the history of politics of Delta, particularly Delta North.

“On behalf of the government and people of Delta, I condole with you and the whole of Ibusa on this sad episode,” he said.

Earlier, Mr Tony Ikpo, a son of the deceased, had welcomed the Governor and his entourage to the family house, and disclosed that the family had commenced meetings on the burial.