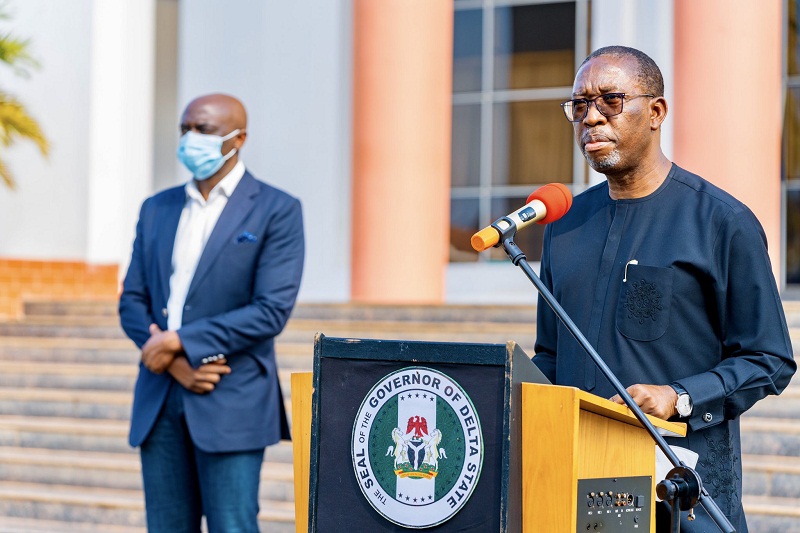 Delta Governor, Senator (Dr) Ifeanyi Okowa, has imposed a 48-hour curfew in the state following Wednesday night’s arson and destruction of government property in Asaba by some youths disguising as protesters.

He also announced the closure of public and private primary and secondary schools in the state until Nov. 2, 2020.

Okowa made these known in a statewide broadcast in Asaba on Thursday, October 22, 2020 and said that the curfew would commence at 6pm on Thursday.

He said that the peaceful protests by #ENDSARS protesters had been hijacked by suspected criminals, and stated that the state government would not watch the elements to have a field day.

The governor commended the #ENDSARS protesters for their peaceful conduct, but appealed to them to give peace a chance by allowing the government to address their demands.

He also appealed to parents and guardians to ensure that their children and wards were properly accounted for, and urged traditional rulers and opinion leaders to lend their voices to the appeal.

He urged youth leaders, community mobilisers and social media influencers, to have a rethink on the protest in the interest of the nation.

“My dear people of Delta State, it has become necessary for me to address you following the unfortunate turn of events in our nation.

“In all my communications with you in the last two weeks, I have consistently maintained that the #ENDSARS protest is a laudable one that has drawn national attention and outcry to the brutalities Nigerians, particularly the youths, have endured in the hands of the now disbanded Special Anti-Robbery Squad.

“I commend our youths for rising to the occasion and organising themselves in such an impressive and spectacular fashion.

“The nation heard your voices loud and clear, and all that now remains is for both the National and sub-national governments to take appropriate remedial measures, which includes embarking on total and comprehensive reform of the Nigerian Police and our governance systems.

“Unfortunately, unlike what we are seeing in the last two weeks, cases of arson, looting and other violent conducts have crept in.

“It does appear that the #ENDSARS protest has been hijacked by some misguided and opportunistic elements. This sad situation threatens to plunge the state into chaos and anarchy.

“It is a clear and present danger that we must stop from happening; only last night, some government buildings were burnt in Asaba,’’ he said.

Okowa stated that following the directive of the National Economic Council, he had inaugurated a Judicial Panel of Enquiry to investigate cases of police brutality in the State, and had also set up a Victims Support Fund.

He expressed confidence that justice would be served and that grieving families would be able to have succour when the panel concluded its work.

He appealed to the youths to remain calm, law-abiding and give peace a chance.

“I want you to consider yourselves as having won this battle; the government is on your side and we are committed to righting the wrongs of the past.

“However, for us to be able to do that, we need an atmosphere of peace and security. We obviously cannot make progress in an atmosphere of unease, when public buildings are being torched, roads are being blocked, and when citizens are not allowed to go about their normal businesses.

“I urge our youths to please leave the streets, sheathe their swords and monitor the response from the government.

“Our cause is just and we agree, but as a state it is the responsibility of all of us to defend our state and we do not want unscrupulous elements, many of whom have come from other states, to destroy that which every one of us has laboured for.

“From all intelligence reports, the people who caused the crisis of last night are not from Delta State, but the opportunities of the protests have given rise to this.

“I want to please appeal to the conscience of our youths; while we have the right to air our grievances, I believe that we all collectively need to defend our state; we need to be able to conserve resources even at this very critical time of global economic downturn.

“We cannot afford to allow miscreants from other states to destroy that which we have built over the past few years. The security of the state is a shared responsibility and one that we must all take very seriously,’’ the governor said.

He congratulated the youths for pursuing a worthy cause and implored them to embrace peace and dialogue, saying “I implore them to give the government a chance to address the wrongs and to address the recommendations that they have made.

“I also want to use this opportunity to call on the youth leadership to please make themselves available for us to dialogue and to ensure that they are part of the processes of the Judicial Panel of Enquiry into the brutalities of the Nigerian police, particularly the defunct SARS.

“I believe that when they cooperate with the Judicial Panel on cases of brutality and killings are brought to the fore, then and only then, can the government attend to grieving families and also ensure that those policemen who are directly and indirectly involved are brought to book.

“In the meantime, I have ordered the closure of all public and private primary and secondary schools in Delta State until Monday, November 2, 2020.

“And, because of the incident that took place last night, I hereby impose a 48-hour curfew starting from 6 p.m. today October 22, 2020.

“It therefore means that everybody is expected to seat at home except those on very essential service in the next 48 hours starting at 6 p.m. today. Thereafter, we will review the situation and know what next to take.

“I appeal to our youths for cooperation; it is not about you and it is not about the protest that you have started. We believe in your cause and we support your cause, but unfortunately, the process is already being hijacked by criminals.

“A lot of robberies took place along the expressway by those who ordinarily shouldn’t have been part of the protest, because the protest was well intended but unfortunately these criminal elements have hijacked the process.

“I want to thank all Deltans for their continuing cooperation and pray that together, we will overcome this,” Okowa added.