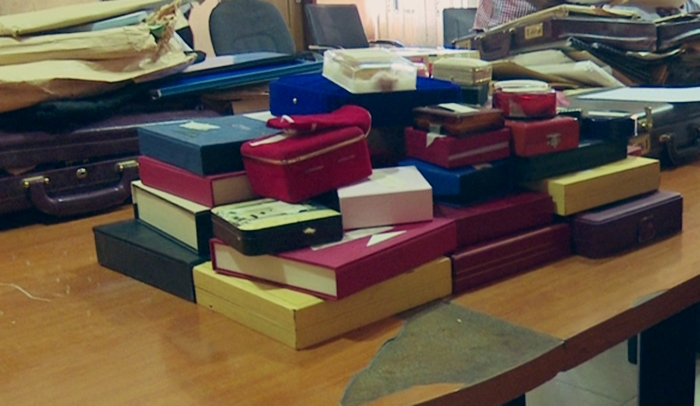 The dogged fight against corruption by the Economic and Financial Crimes Commission, EFCC, has once more paid off as huge deposit of jewelries and documents of about 50 landed properties were recovered from the residence of an In-Law to former NSA, Major General Abdullahi Sarki Mukhtar.

This discovery and recovery is part of an on-going investigation into an intelligence report alleging that huge sums of money including foreign currencies were hidden in the premises. A release by the anti-graft commission is highlighted below;

“The Economic and Financial Crimes Commission has recovered jewelries worth millions of Naira from the house of one Akka Babba Danagundi, brother- in -law to a former National Security Adviser to Late President, Umar Musa Yar’aduwa, Major General Abdullahi Sarki Mukhtar.

The jewelleries were found in a fireproof safe hidden in a house belonging to one Akka Babba Danagundi at No. 375, Gwangwazo quarters of Kano Municipal, Kano State. About 50 documents in respect of landed properties bearing the name of the former NSA and his wife, Binta Sarki Mukhtar were also discovered.

The discovery was sequel to an intelligence report alleging that huge sums of money including foreign currencies were hidden in the premises.

During the operation, Aiko Fireproof safe and seven suspects including the house owner, Danagundi were arrested and brought to EFCC ‘s Kano Zonal Office where their statements was taken.

On arriving at the commission’s Kano Zonal Office, the safe was opened and jewelries such as necklaces and wristwatches including 50 Certificates of Occupancy for properties located in Kano, Kaduna and Abuja were found. The jewelries found includes 55 wristwatches, including three gold watches. Also 37 gold jewelry weighing 1,907.9g and another 15 pieces of fashion jewelries were found.

All the suspects arrested during the operation were released on administrative bail with the exception of Danagundi who is still in custody, assisting the investigation.”