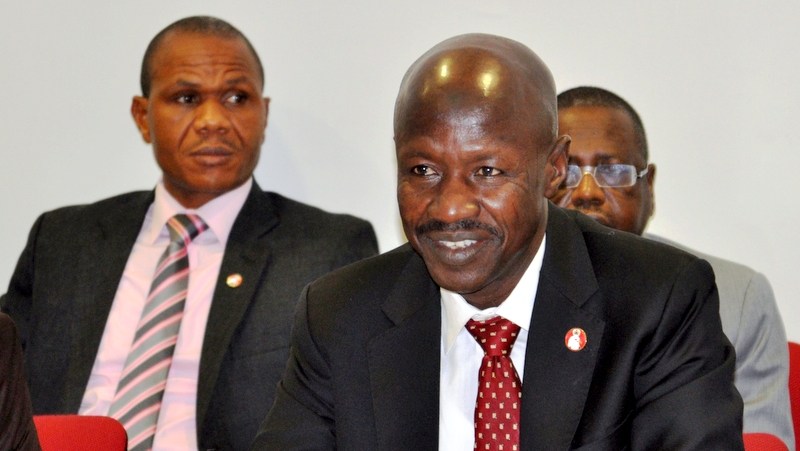 An aide to the President of the Senate, Bukola Saraki has denied any involvement of his boss with the Paris Club Refund as alleged by EFCC Chairman, Ibrahim Magu.

A statement issued on Sunday by his Special Adviser on Media and Publicity, Yusuph Olaniyonu stressed that Saraki had no business with the refund as alleged.

Reacting to a recent publication allegedly leaked by the Acting Chairman of the Economic and Financial Crimes Commission (EFCC), Mr Ibrahim Magu, Olaniyonu stressed that the allegations against Saraki were false.

“Our attention has been drawn to the circulation of a report I the media said to have been leaked by the Chairman of the Economic and Financial Crimes Commission (EFCC), Mr. Ibrahim Magu to some journalists where he made several allegations against Senate President, Dr. Abubakar Bukola Saraki, as it concerns the payment of the Paris Club Fund refund to the Nigerian Governors Forum (NGF).

“Let us first state that these allegations are not new. The EFCC had from the onset of its investigation into the Paris Club refund made attempts to drag in the name of Dr. Saraki and we have promptly denied any such involvement of the Senate President. In fact, the EFCC itself came out to deny the report as it then said it had nothing to indict the Senate President. The anti-graft agency said the investigation was still on-going then.  Yet, as at that time it had all these information it is now dishing out.

“It is obvious that at this point when Mr. Magu believes the Senate President should be blamed for his failure to secure confirmation as Chairman of EFCC by the Senate, he would want to fight back by cooking up reports and masterminding its leakage.  We maintain our stand that Dr. Saraki has no direct or indirect link to the distribution of the NGF money. No money from the Paris Club refund was paid to Dr. Saraki.

“In addressing the specifics of the allegation in the reports as we gathered from the press, EFCC believe that since the Senate President has worked in the same organisation with Mr. Robert Mbonu before, whatever transaction he is involved in should be linked to the Senate President in this era of mud-slinging and much-raking. We would like to say that Mr. Mbonu is not representing Mr. Saraki in any transaction he does with the NGF and no money from his company, Melrose, in his dealing with Nigeria Governors Forum came to Dr. Saraki either directly or indirectly. And if the EFCC has any information to the contrary, we challenge them to make it public.

“We state categorically that no aide of the Senate President acted on Saraki’s behalf in whatever they do with Mr. Mbonu.

“Again, If Melrose paid any money to a jeweller or any shop,  that has nothing to do with the Senate President. We believe Melrose must have the necessary documentation in support of their transaction and we are sure the EFCC is aware of all these.

“In the same vein, if Melrose chose to invest in another company, that decision has nothing to do with the Senate President and the act of drawing a link between Mbonu and Saraki can at best be only pure mischief.

“At this point, it should be noted that Xtract Energy Services Limited is a well known foreign exchange dealer with almost 15 years of existence in the market and the company is widely known to do business with many organisations in the country.  The last time the Senate President patronised the company was on December 19, 2014 and we challenge Mr. Magu and the EFCC to prove that the Senate President transacted any form of business with the foreign exchange dealer in the period of the payment of the Paris Club refund.

“We call on members of the public to view this concocted and leaked report as Mr. Magu’s form of fighting back. The report has no truth in it. It should be noted that the Senate President was not behind Magu’s failure to get confirmation from the Senate. That was democracy in action. Dr. Saraki is merely a presiding officer and first among equals. Dr. Saraki did not in any way interfere with the confirmation process.”

From the initial tranche of ofN522.74 billion, about N19 billion was remitted by states into two accounts of the Nigeria Governors Forum (NGF) as commission to consultants.

But the commission was found out to have ended up in the accounts of some of the seven governors, some public officers and some individuals who had no business with the refunds.

It was also learnt that some consultants engaged by the NGF and some states have not been paid by the governors.

Besides locating the two accounts where the N19 billion was allegedly remitted into, the EFCC has interrogated more than four people involved in hiring of consultants and payment.

Some states remitted as much as N600 million into NGF’s emergency accounts for the commission.

It was learnt that the two NGF accounts were hurriedly opened in defiance of the agreement.

According to findings, reports made available to presidency by the EFCC and other security agencies showed that the governors did not keep to the terms for the refund.