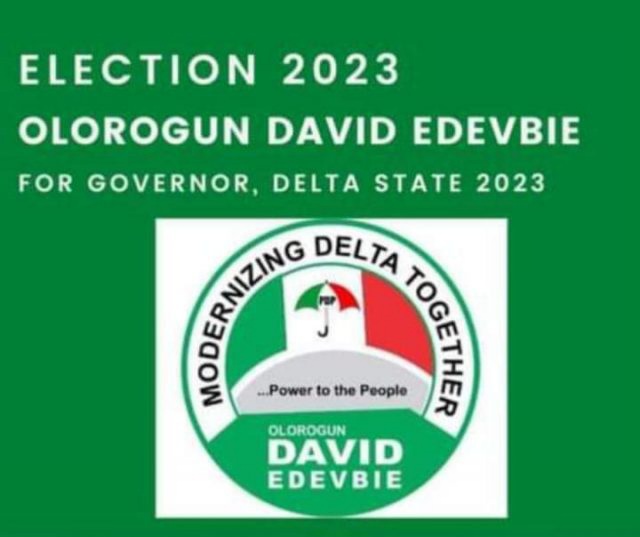 Once again, Fred Latimore Oghenesivbe continues to device and hide under his own falsehood to pursue a failed propaganda against Olorogun David Edevbie.

In the latest under reference, he accused Olorogun David Edevbie Media Team of being responsible for a story in which some delegates reportedly called for mass rejection of now Francis Oborevwori at the PDP primaries based on the well publicised scandals surrounding his identity, age and certificates.

Latimore’s intention, as well betrayed by his caption, is to cunningly create disaffection between the leadership of our great Party, the PDP, and Olorogun David Edevbie but he failed in the attempt.

We wish to state that we love and respect the person and office of our State Party Chairman, Olorogun Kingsley Esiso, and also always faithfully and loyally abide by the directives of our great party, the PDP.

We hereby state that we did not author any such story, we did not participate in the incident described in the story, we do not know the writer and, therefore, we have not in any way disobeyed the instructions of our respectable State Chairman as far as the story is concerned.

As a matter of policy, we do not report the activities of delegates when such activities do not relate to Olorogun David Edevbie. We only became aware of the story based on Latimore’s write up and, reading through it, we find that Edevbie is not mentioned anywhere nor did the author canvass support for him.

Our understanding of the story, as brought to our attention by Latimore, is that the delegates are reacting to acts of intimidation against them and, by their own judgement, also pointing out the dangers in pitching with Oborevwori both because of the foreseeable collateral liabilities to the party inherit in the questions surrounding him and also because they can see that he does not have adequate capacity to bear the flag of our great party, talk less of governing our dear Delta State.

We wish to remind Latimore that over 10 aspirants were screened and only Oborevwori returned with question marks surrounding his name, age and certificates. Understandably, it is party members are Deltans, not us, that are asking questions for which they appear not to be satisfied with the answers. Unfortunately, we are not responsible for the changes in his name and age in his certificates, we do not know why the names kept changing and we are neither judge nor jury. We are only hearing, watching and finding it all curious as most Deltans also are.

For the avoidance of doubt, it was Latimore himself, in one of his “manifestly reckless” write-ups (to borrow the words of the Delta State Government about him), who likened Oborevwori to Buhari whose certificate was also under question into his election in 2015.

Drawing from the terrifying comparison, it was only logical for the delegates to have pointed out, as they did in the report, that the mistake of electing a leader with questionable credentials, inadequate knowledge, low experience and scarce exposure, especially in this era of information-driven and knowledge-based economy, would be disastrous for Delta State just as it has been disastrous for Nigeria in the past seven years, and with frightening consequences that may spiral into the future.

We however also note the baseless innuendoes contained in Latimore’s false charge, as he often does like a broken record, but we are confident that Deltans and PDP delegates already know Edevbie very well.

He does not need to swear plenty affidavits just to identify his name or age. They know that all these years he has not been charged anywhere, home and abroad, for any offence, despite the uninformed and frivolous propaganda. They are satisfied with his educational qualifications and demonstrated professional skills. They have approved and accepted his Modernisation Agenda as the sure path for the development and growth of the state and they trust in his experience, competence and capacity to perform.

Beyond confirming him through their overwhelming votes at the PDP primary as their Governorship flag bearer, come May 23, they are already anxiously looking forward to a glorious, industrialised and socio-economically vibrant Delta championed by David as their Governor.

Therefore, we wish to appeal once again to Latimore to leave us out of Oborevwori’s scandals. Those who have mucus infection should learn to cover their mouth to cough their cough.