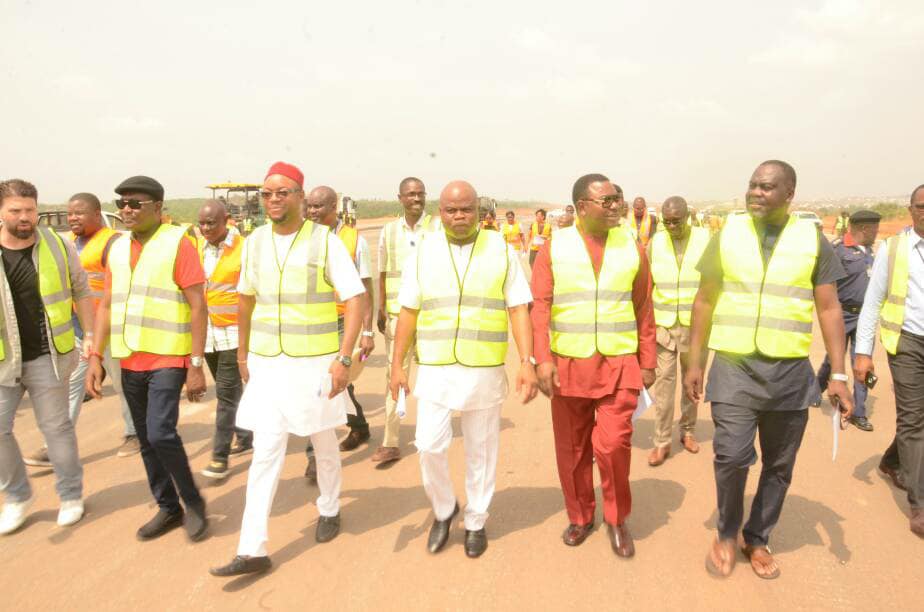 …Commends Governor Okowa for Re-Awarding the Airport Project to Setraco.

The House Committee on Works of the Delta State House of Assembly ably led by its Chairman, Hon. Chief Evance Ochuko Ivwurie has expressed the Committee’s gratitude to the Delta State Governor, His Excellency Sen. Dr. Ifeanyi Okowa for re-awarding the Asaba International Airport project to Setraco Nigeria Limited.

Speaking to newsmen during the inspection tour, Chairman Ivwurie said it is our constitutional responsibility to oversight the Asaba International Airport project and other infrastructural developmental projects across the state. This inspection is to ascertain the level of work done so far on the Airport by the new contractor and we have no modicum of doubt that the Airport will be completed, delivered and opened for 24 hours uninterrupted flight operations before the end of April 2018 which the contractor has assured the Committee.

Hon. Ivwurie said before now there was a recalcitrant and irresponsible contractor handling this project and the contractor frustrated Deltans and Nigerians using the Airport until the Delta State House of Assembly Committee on Works intervened legally and forcefully. The Works Committee basically from day one chased and harassed the contractor, ULO Consultant Limited by exerting maximum coercion and pressure on the contractor forcing them to withdraw from the said Airport contract work.

“Deltans heave a sigh of relief the moment the Works Committee chased the endless and non-repentant contractors from the Airport and today we are happy that the rehabilitation of the Runway and Taxiway of the Airport has been re-awarded to Setraco Nigeria Limited by the Delta State Government. The Committee is pleased and satisfied with the job done so far by Setraco Nigeria Limited,” Chairman Ivwurie stated.

According to Hon. Ivwurie “the Committee is using this medium to express it’s heartfelt gratitude and thanks to the Delta State Governor, His Excellency Senator Dr. Arthur Ifeanyi Okowa for listening to the Delta State House of Assembly Committee on Works by re-awarding the Asaba International Airport to a world class and competent company, Setraco Nigeria Limited”. Chairman Ivwurie further stated that as you can see for yourselves, this visit is different from our previous ones, work on the Airport is in rapid progress and it is been done very professionally. Every process for engaging in engineering and Airport construction is being observed and respected by Setraco Nigeria Limited. We have seen their work plan, work schedule and I can categorically state that the Committee is very pleased and satisfied with the work done so far.

The former contractor put Deltans and the State Government through a harrowing experience. “That contractor put all of us in a big fix, big jam and a big mess and we had to chase them away for the good of the State and today, seeing what Setraco is doing, we are indeed proud of our decisive and courageous action against the stubborn former contractor”.

While thanking the Commissioner for Works, Chief James Augoye and its team, the Delta State Government Consultant in charge of the Asaba International Airport, Olayiwola Rasheed and the Special Project Director, Hon. Austin Ayomidejor for their sacrifices, Hon. Ivwurie encouraged them to continue to put in their best efforts until the airport is completed, delivered and put into 24 hours uninterrupted flight operations in April 2018. He also thanked Setraco Nigeria Limited Area Manager Jihad Yaghi; Joseph Halby, Project Manager and other staff of the company their dedication to their duty.