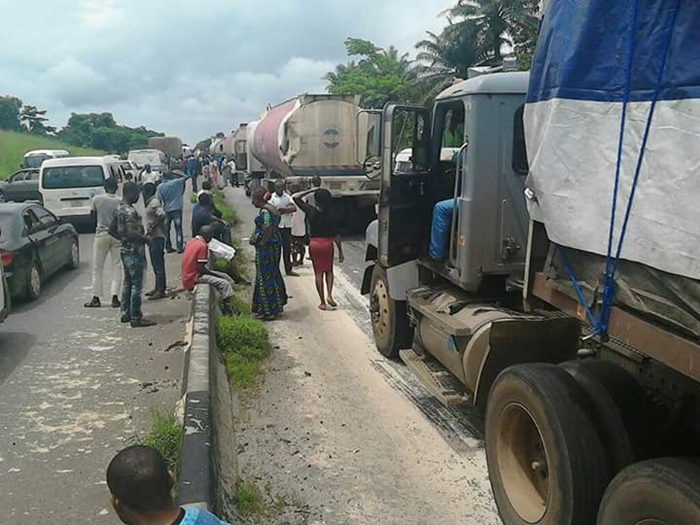 Commuters plying Benin-Lagos road were on Friday, 7 July, stranded for several hours as luxury bus drivers barricaded the road in protest against alleged killing of a pregnant woman and a male passenger of the Young Shall Grow Transport Service by armed robbers in the early hours of Friday

A driver with  Ezewanta Transport Service and his conductor were also shot and were taken to an undisclosed hospital for treatment.

It would be recalled that on 1, June 2017, armed robbers shot and killed passengers on Benin-Lagos Express road which led to the closure of the road by protesters leaving commuters stranded for several hours.

The Sun Newspaper, Nigerian Tribune, Complete Sport, Daily Independence, The Pointer, Guardian and Business Day Newspaper were among those who were held for several hours.

According to Mr. Sulaman Tajudeen, a driver with the Complete Sports who arrived Benin  City at 2:20pm said the luxury bus drivers blocked the road in protest of those who  where shot and killed and the frequent robbery attacks on the Benin-Lagos express road.

Tajudeen said the protesters  were not willing to leave the roads until the government puts an end to the robbery attack on the road.

He said at the heat of the protest, the luxury bus transport union of the zone who called for the protest went to ascertain the health conditions of those shot by the armed robbers and were told by the doctors that they were in a stable state of mind and that the sum of N35,000 should be deposited to commence treatment on them.

He said the union immediately swung into action by asking stranded passengers and transporters to contribute their quota to foot their hospital bills which the passengers all sympathetically did.

He said the union having been satisfied with the response gotten from the commuters and other drivers, decided that the road should be cleared for vehicular movement.

Attempt to get the reactions of the Edo State Police command proved abortive as several phone calls put across to the State Police Public Relations Officer, Mr. Joseph Kombe were left unanswered.