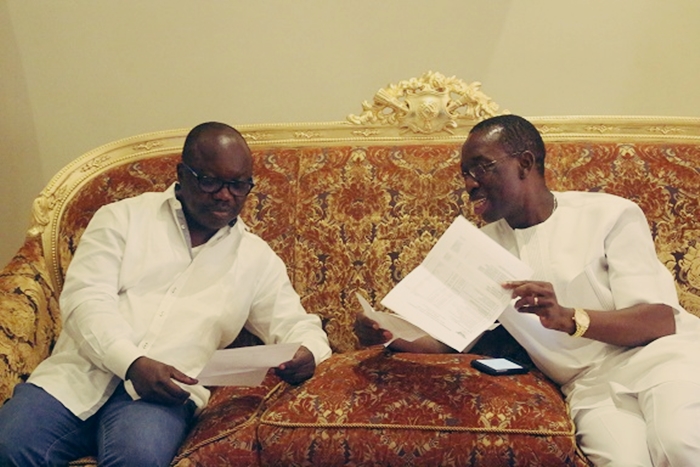 And yes, former Delta state governor, Dr. Emmanuel Uduaghan made his own blunder but, there’s no single person in Delta State that would say he or she didn’t benefit directly or indirectly from Dr. Uduaghan’s programmes. He, Dr. Uduaghan aimed directly at the people with his policies and programmes. Was it Transport scheme? Was it healthcare? Was it free Education? How about the Edumarshal he set up that encouraged students to go to school? Some Deltans got their JSSCE and WAEC without spending a dime for enrolment. And I remember when the management of DELSU wanted to increase school fees, Dr. Uduaghan waded in and subsidised it thereby eliminating increase of school fees.

But how is it today? How about the parks he built? Now, I am not here to praise Dr. Uduaghan neither am I here to crucify or condemn Dr. Okowa. But I am here to express myself as a Deltan who understands the real business of government.

I never wanted to say this. I never wanted to be part of this anymore but, the arguments Barr. Latimore Fred had with me popped up this. When the Delta line was sold, I used Lagos state buses that are still working good to cite example due to continuity and he told me Lagos buses are owned by private individuals even when I know Gov. Ambode even buys more in addition to the ones on ground. Then I talked about Comrade Buses and he told me “they’re out of roads in Edo state. So, Uduaghan Buses need to go.”

But little did he know I have family and friends in the city of Benin and I would also be visiting Benin city the following day. I called a friend and confirmed from him about Comrade’s buses and he told me they’re working fine. Good! Then I went to Benin to see myself and I got a snapshot of the buses myself and they’re still working good in Benin. Latimore Fred lied! I hate it when elderly men lie! It stinks to high heavens.

You see? There’s something Dr. Okowa fails to understand. He fails to understand that “continuity is the mother of development.” That’s why anything that has to do with Dr. Uduaghan, he brings it down. He sold what Dr. Uduaghan put in billions of naira for a paltry sum of N161 million. Edumarshal that helps in the education sector, was scrapped. Free Education dead and buried. Parks dead and gone. Even as to ordinary DESIEC of 2012 under Uduaghan was repealed and dissolved. DESPPADEC, it’s completely dead and rotten. In fact, anything that has to do with Dr. Uduaghan is being brought down by Dr. Okowa. Yet, we’re being told there is no money. They give excuses that how can Delta Line be working yet the government still bears its running cost and cost of operation? But was that the reason why it was sold to God is Good Motors for a paltry sum of N161 million against the highest bidder of N2 billion of NLC? Sometimes their defence exposes their own ignorance.

Continuity, I’ve always known is the mother of development. You don’t scrap laid down structures and start new ones from the scratch and you tell us there’s no money. Why not build on laid down structures and add the ones of your own ideas? Why not work on continuity since you’re all PDP family? And even if you’re not same PDP family, you still need to understand the continuity principles that the developed states and countries use.

When we talk about Lagos state government, you all always cover up laziness to work with “Lagos state has been there for years. Lagos state is a country of its own in Nigeria. Lagos state has federal presence. Lagos state is this and Lagos state is that.” But you all failed to realize that as Tinubu left office, Fasola never brought down his structures but he worked on them and added his own. When Ambode came in, despite the political misunderstanding he had with Fasola, he still never brings down Fasola’s structures but he built on both Tinubu and Fasola’s structures. And that’s why today, you see LASMA, LAWMA, KAI, and etcetera that were set up by Tinubu and Fasola still work till date. But where is Delta State Waste Management? Dead and buried! How about DESMA that was even set up by Dr. Okowa himself? He couldn’t even manage it! How about the Lagos state Housing Scheme? The town planning? The roads? Now, I don’t have to continue with Lagos. Let’s take a clue of other states.

So, how about Edo, Anambra, Akwa-Ibom, Rivers states that all follow continuity? Latimore Fred fails to understand that, that over 80% of present day Deltans don’t go out of the state, others still don’t travel out of the state and that was why he was able to tell me with confidence in his voice that Comrade buses are off Benin roads whereas they’re being taken care of by Governor Obaseke whereas Governor Okowa was busy selling off what was purchased with billions and millions of naira.

Go to Edo state that’s not benefiting 13% derivation like Delta state and see roads. Edo state street that was tarred is just like Eku-Abraka, Ughelli, Asaba roads that are the major roads of Delta state yet just too shallow. When you see Edo major roads you’d weep for oil producing state.

Go to Akwa-Ibom state and see continuity. Governor Emmanuel Udom has never for once scrapped Governor Akpabio’s laid down structures. He built on them and added his own thereby moving the state forward.

How about Rivers state? When you enter Rivers state, you’d definitely see the presence of government.

And coming to Delta State, a laid down structure of the former governor is being brought down to zero base. No continuity of building anything on governor Uduaghan’s structures. Dr. Emmanuel Udughan’s 8 years in office was a complete waste according to his successor’s policies and programmes.

Now, is not that Dr. Okowa doesn’t care. But, he still doesn’t get it. There are two major things that help any sincere government to succeed which are “CONTINUITY and COST EFFECTIVE.” You say there’s no money yet, you bring down a laid down structure without thinking of cost effective. When I look around the whole scenario, I see no sincere government!

And the funniest thing is that, anything he does, any move he makes, every step he takes, you see them praising him that he does the right thing. They’ve made his government so boring and irritating with so much praises.

The way government is being run in Delta state is not encouraging at all. Now that he brings down laid dowm structures, when the next Governor comes and brings down his own and start new ones, what would happen? Setback! And why would you think Delta state would never experience setback?

So many of our youths have taken to iPad. Hahahahahahahah! I just look at them and keep laughing at their ignorance. You have no job, no source of livelihood and the people you’re glorifying on the social media do nothing, I mean absolutely nothing to create job for you but only MB and the name of I know people in government because you have a snapshot with them at any nearby event or hotel and you’re happy that God connects you to people that matter yet they careless about you and your welfare.

You hardly see their children to associate with them because it’s either they’re in Europe or America or Dubai lavishing the funds that was supposed to be used to build industry to create job for you and get employed. You can’t think but you can take your ignorance to social media to talk out of reality. Continue!

Our youths have been defeated and that’s why some have taken to eating faeces to make money instead of holding the government for accountability. And that’s why our government is being run without proper Audit work.

I weep for what I see but thank God I am not a defeated youth.