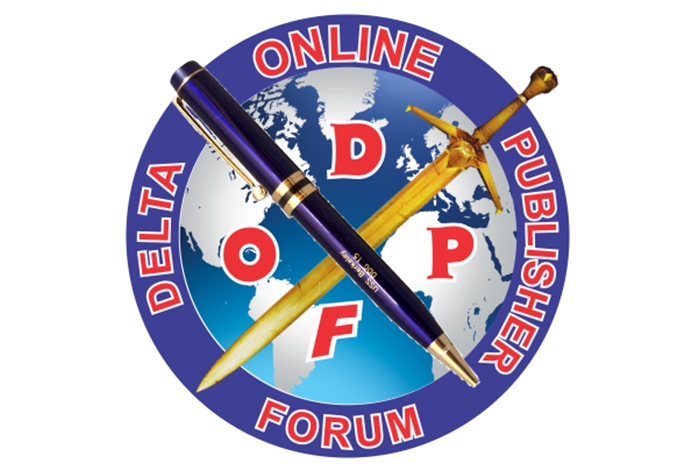 The Delta Online Publishers Forum (DOPF) has condemned in strong terms the threat to life of one its members Mr. Albert Ograka, a Journalist and Publisher of BLANK NEWS ONLINE by agents and officials of Delta State Government over a publication bordering on an alleged financial scandal at the State Universal Basic Education Board (SUBEB).

The publication which revealed that Mrs. Pat Ejeteh, the former Chairman of the board had been arrested for questioning by the Nigeria anti-corruption agency, Economic and Financial Crimes Commission (EFCC) over fraud related matters, immediately led to life threatening messages and calls to Mr. Ograka from some officials of the Delta State Government

According to Ograka who quickly informed DOPF of the red alert on his life following the publication said that, he was called by the Chief Press Secretary (CPS) to the governor, Mr. Charles Ehiedu Aniagwu from his phone number 080332…at 05:36 pm, 05:37 pm and 06:32 pm respectively (Nigeria Time) on Tuesday, July 17, 2018 with threat that if the request to pull down the story and apologize is not immediately carried out, he will allow the use of operatives of the Nigeria Police and Department of State Security (DSS) to arrest him.

“The CPS to the Delta state governor, Mr. Charles Ehiedu Aniagwu had argued that the story was false and that Mrs. Pat Ejeteh was his relative and could not have been arrested without his knowledge.

“I requested that a rejoinder should be written by Mrs. Pat Ejeteh, if she thinks the story was false, instead I was reminded by Mr. Charles Ehiedu Aniagwu that one of the sons of Mrs. Pat Ejeteh who presently serves in the Nigeria Navy is angry and would not hesitate to deal with me, adding that he (Charles Ehiedu ANIAGWU) is also not happy with me because of the story.

“I also received another call, urging me to quickly pull down the story from the Executive Assistant to the governor, Directorate of Orientation, Delta state, Mr. Eugene Uzum from his phone number 080387.., at 10:14 pm on Tuesday, July 17, 2018.

“I have received several threat calls from unknown phone numbers and unknown persons since the story was published.

“I want the Nigeria Union of Journalists (NUJ), Delta state Council; NUJ South South, NUJ National, the Nigerian public, Human Rights Organizations, Delta Online Publishers Forum (DOPF), the Committee to Protect Journalists (CPJ) and the International Community to know that my life and that of my family members are presently in danger and to also hold the above named officials of the Delta state government responsible for any unforseen circumstances and incidents.”

In a swift reaction, the foremost Online News Publishing body in the State in a Press Statement condemned the ugly trend of bullying, harassing, intimidating and threatening of journalists who are doing their legitimate business from agents of Delta state government that has enjoyed robust media coverage from all members of the Delta Online Publishers Forum.

The widely circulated Press Statement released on July 19, 2018 and signed by the secretary of DOPF, Shedrack Onitsha reads;

The Delta Online Publishers Forum (DOPF) has been briefed of alleged threat to life of one of its members, Mr. Albert Ograka, Publisher of www.blanknewsonline.com, an online news website based in the state, following a report published in the medium, which bothers on alleged fraud in State Universal Basic Education Board (SUBEB), an agency of the Delta state government.

DOPF was briefed by Ograka who was carrying out his lawful duties that agents and officials of the Delta State Government issued threat to his life over the said report.

Our members have been going about their duties of bridging the gap between the government and the people and also holding the government accountable to the people responsibly, therefore, we wouldn’t condole any attempt to hound us from this sacred responsibility.

If as was told, the statutory anti corruption agency who were reported to have carried out the said arrest had not denied the said report since it was published, then we make bold to condemn the idea of bullying, harassing, intimidating and threatening journalists who are doing their legitimate business from agents of Delta state government that has enjoyed robust media coverage from our members.

We had expected officials of the state government to, in the first instances with the level of cooperation given to this government by DOPF, reach out to its leadership instead of resorting to direct threat as we have been briefed about by our member. This we think is the right thing to do.

However, we want to give the Chief Press Secretary (CPS) to the governor, Mr. Charles Ehiedu Aniagwu who was alleged to have called and requested that the said report be taken down or would launch security agents against our member the benefit of the doubt to state his direct reaction to the report that has warranted this threat to life alarm.

We call on the CPS to the Delta state governor, Mr. Charles Ehiedu Aniagwu, the Executive Assistant to the governor, Directorate of Orientation, Delta state, Mr. Eugene Uzum, who were alleged to have made the threat phone calls, to strengthen their personal relationship with journalists to avoid misgiving of this nature capable of jeopardizing our corporate mutual relationship with the government.

While calling on our members to ensure that every of their publications are within the ethics of the journalism profession, we also call on other agents of the government who want to leverage on the said incident to veer their anger on journalists and our members to trend carefully because DOPF wouldn’t stand against itself for any reason for any overzealous government official. We therefore by this statement put members of the public on notice to know who to hold responsible in case any harm come near Mr. Albert Ograka and his family.