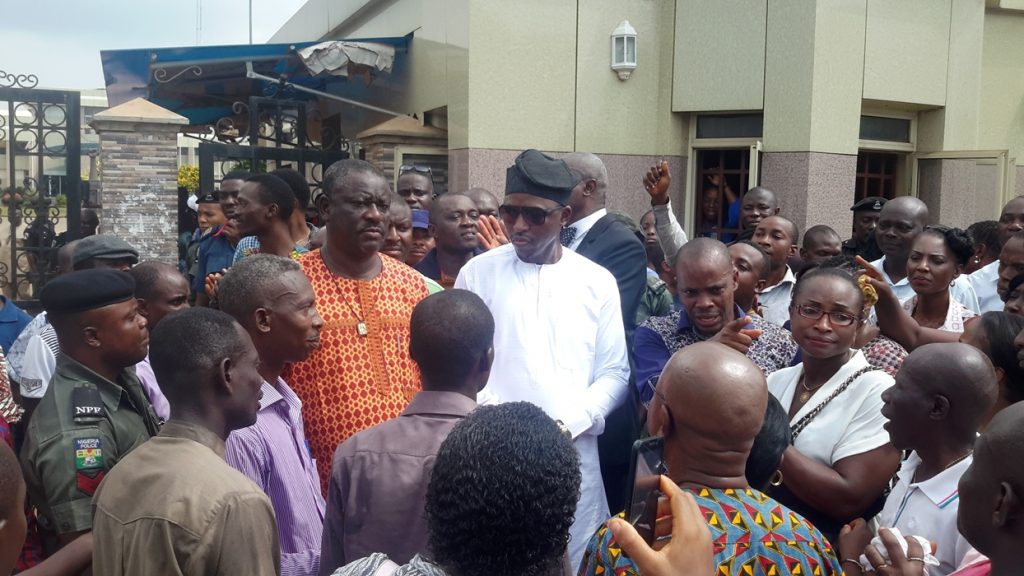 Protesting workers of the Delta State House of Assembly have suspended their strike action after their demands were reported to have been approved by the state Governor.

The Protesting workers who almost went berserk following an attempt by an honourable member (Name Withheld) to engage in fisticuffs with an employee of the Assembly were later pacified by the news that their demands have been approved.

The Parliamentary Staff Association of Nigeria, PASAN, Delta State chapter, who had shut down legislative activities since Monday, finally had the opportunity to express their frustrations to the Honourable members who were coming in for the day’s activities but were met with a surprise as one of the principal officers of the House charged at protesters with intent to engage in a fight.

If not for the timely intervention of our respected Police Officers who were at hand to prevent the breakdown of law, it would have resulted to a free for all fight between the protesting workers and Honourable members of the state assembly.

Calm was later restored when former NLC Chairman in the state, Comrade Mike Okeme, Deputy Speaker of the House, Rt. Hon. Ossai Osanebi, Hon. Daniel Mayuku and Hon. Timi Tonye addressed the angry workers. They sued for peace and encouraged the protesting workers to go back to work as their demands have been approved by the state Governor.

Addressing pressmen, the Chairman of PASAN at the Delta State House Of Assembly, Emmanuel Edozie, said that they have resolved to suspend the strike pending the actualization of the approved demands as reported.

Tragic: Man Kills Daughter, Sells Head to Son for N3,000
Oshiomhole and Odubu To Get Residential Buildings Worth N300 Million