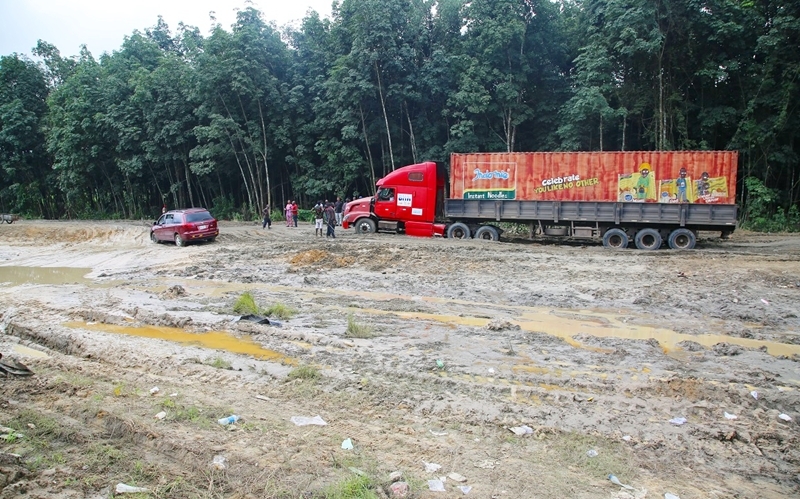 The Delta State Government has stated that it will intervene on the failed sections of the Warri-Sapele-Benin road to reduce the sufferings of road users on the highway.

Commissioner for Works Chief James Augoye and his Information counterpart Mr Charles Aniagwu stated this Wednesday, September 4, 2019 at Okuvo, Okpe Local Government Area of Delta State while conducting journalists round the failed sections on the road.

The Works Commissioner noted that although the road is a Federal Road, Deltans and other Nigerians depend on the road to erk a living for themselves.

He said Governor Ifeanyi Okowa was disturbed by the sufferings of the people who ply the road and decries the loss of man hour and productive time on the road.

“This Warri-Sapele-Benin road is a Federal Highway and as a state we actually did palliatives works on some portions of the road before now and the parts we intervened on are still very solid till today, what we are doing here is to look at the possibility of the state government intervening.

“The work here is not just maintenance or rehabilitation, it requires total reconstruction because the mud here is very clayed and it needs to be excavated to the soil base and refilled with sharp stand to make it solid so there is much work to be done here.

“Governor Ifeanyi Okowa has directed that we visit the site and see the possible way of intervention by the state government to free the masses from the sufferings on the road.

On his part, Commissioner for Information, Mr Charles Aniagwu said the state government was intervening because Deltans and Nigerians use the road irrespective of where they are from, because what they are going through on account of the deplorable condition of the road.

“You have seen it by yourself that it is in a very very bad condition and we are pained so it doesn’t just have to be Deltans that pass through here for us to be disturbed, we are disturbed because what is happening here affects not just the economy of the state and the nation.

“The Commissioner for Works has made it very very clear that we are going to start work in earnest but we have to plead with the Federal Government to assist us in taking care of these Federal roads because it is digging very deep into our pockets as a state and the more they assist us the better for us and the better for other Nigerians that are making use of these roads,” he added.

The duo had earlier inspected work at the ongoing construction of the Ughelli-Asaba Federal highway and appealed to the Federal Government to reimburse the State Government for previous interventions so that such funds can be deployed to other needs.

“As you can see it is taking us several billions to ensure that these roads are put to motorable condition. It is costing the State Government several billions to carry out these interventions and of course you know there are a lot of needs and other challenges that are within the direct responsibility of the State Government that requires attention but here we are investing huge sums of money to address these Federal roads because we believe that leaving it unattended will lead to untold hardship for our people.

“We are equally using this opportunity of this inspection to plead with the Federal Government to reimburse the State Government with what it has spent before on previous interventions so that we can deploy the funds to other important needs.

“The Commissioner for Works had earlier hinted that the 47.8km Section A alone is costing the State Government over N19bn and you know what that kind of money can do for us as a state,” he said.

The On-going Construction of Ughelli-Asaba Express Road Sector A.

“Governor Okowa is seriously troubled that all the Federal roads in the state are in terrible conditions, he is disturbed by the hectic traffic at the Head bridge leading into Onitsha in Anambra state, you will recall that at one time we wrote to the Federal Government to allow us fix that road, but they declined on the ground that they have engaged a contractor to address the failed sections of the road.

“The Asaba-Benin stretch of the road has also become a nightmare and even our decision to remediate part of the Agbor-Eku road is just a palliative as that road requires total reconstruction. So you can understand now why we are pleading with the Federal Government to expedite action on these roads.

“The fact is that beyond the hardship faced by commuters it’s effect on the economy is incalculable.” he said.