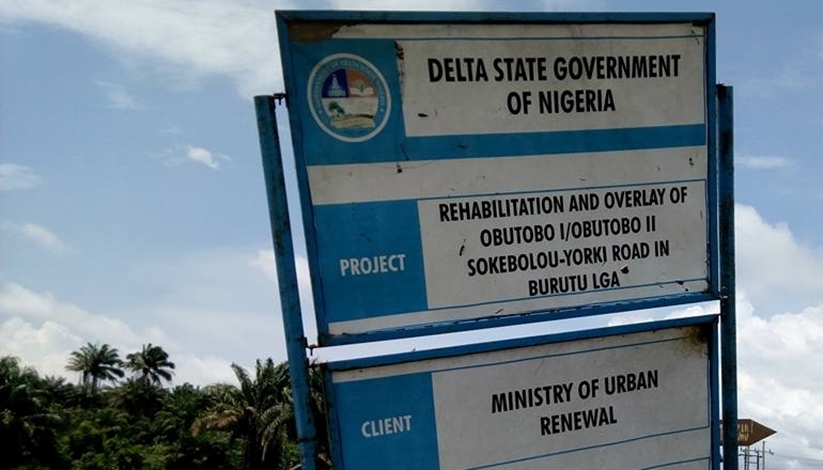 The Delta State Government has restated its commitment to early completion of Obutobo 1 and 2, Sokeblou, Yorki road projects in Burutu local government area.

The Commissioner, Urban Renewal, Dr. Julius Takeme whose directorate is overseeing the execution of the project, gave the assurance during an on the spot assessment to ascertain level of work done so far.

The Urban Renewal Commissioner, Dr. Takeme said the Obutobo 1, Obutobo 2, Sokeblou and Yorki communities road project was in fulfillment of Governor Okowa’s promise to connect riverine communities that are close to each other by road.

Dr. Takeme said he was impressed with the speed and quality of work done so far by the contractor and charged him to  the maintain pace of work until completion of the project.

He also commended the contracting film for its capacity to move materials from Warri to sustain the project despite the difficult terrain.

Dr. Takeme noted that before now the roads were not motor-able, stressing that upon completion the locality will be open to more socio economic activities.

The Commissioner said internal transportation business has started booming and new buildings springing up as a result of the project.

He thanked the host communities for maintaining the peace and for their encouragement to ensure that the project did not suffer any setback.

A Director in the ministry, Engr Mudiaga Ejohwomu said the total length of the road project is 19.71 km, stating that the project is 80% complete.

He also informed the Commissioner of the friendly dispositions of the communities, stressing that the support and cooperation of the people was worthy of note.

The Supervisor of the construction firm, Mr. sule Austin said the project is to be completed in few months time and will be ready for commissioning as soon as possible.

Some residents of the communities who spoke on interview said they were happy with Okowa’s government and commended the Governor for the road projects.

They promised to vote for the reelection of Dr. Okowa as the Governor of Delta State in the forthcoming general election.

Okowa, Uduaghan, Ibori Mourn As Remains Of William Ibori Is Interred
We Will Maintain Stability In Oil And Gas Producing Communities – Fregene
Advertisement