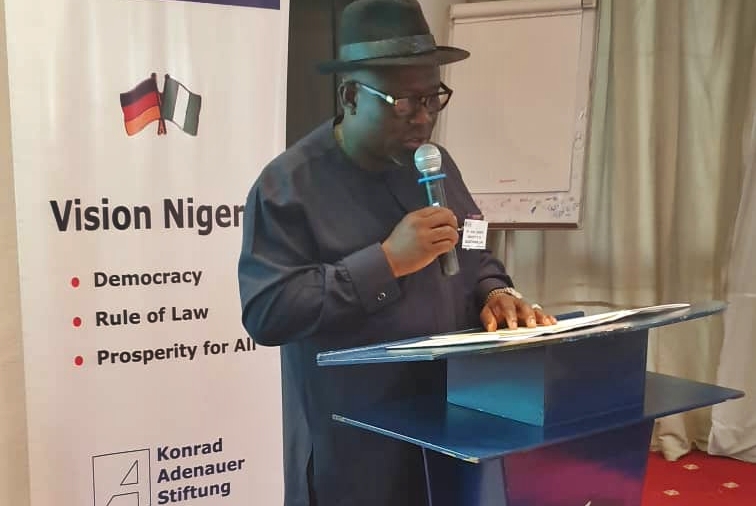 The Speaker of the Delta State House of Assembly, Rt. Hon. Sheriff Oborevwori has called  for collaborative efforts between the Legislatures in Rivers and Delta States to proffer solutions to the numerous environmental, social, economic, health and physical challenges confronting the two states.

In his goodwill message on Monday, May 20, 2019 at the opening of a two-day Orientation Workshop organised by Konrad Adenauer Siftung for members -elect of  Rivers and Delta States Houses of Assembly, the Speaker expressed appreciation to the organizer of the workshop for extending the Orientation programme to members -elect of the Seventh Assembly of the Delta State House of Assembly.

Speaker Oborevwori said that Rivers and Delta State have so many features in common, saying that both states are situated in the Niger Delta Region and having similar terrain and topography.

“They are both oil producing states and therefore, face similar environmental  challenges. Both states also have in common people speaking identical dialects. Last but not the least,  Rivers and Delta State share the same political ideology as their Governments belong to the same political party,  the PDP “, he said.

The Speaker added that; “I took pains to draw this analogy to drive home the point that Rivers and Delta States and indeed other states in the  South South region in Nigeria need to collaborate at the regional level to bring development to our people. The  fulcrum of this unity to bring economic emancipation of our people is no other institution but the Legislatures of these states. We therefore need to work together to formulate policies and programmes, and work out a regional development road map for the South South region”.

“I  believe that this meeting is divine and I hope that we will continue to engage as sister Legislatures to proffer solutions to the numerous environmental, social, economic, health and physical challenges confronting our states. If it were possible, I would have ruled that we held intermittent joint sittings for both Houses of Assembly”, he said.

The Speaker requested Konrad Adenauer Siftung to consider Delta State House of Assembly as one of its catchment Assemblies in Nigeria for capacity building, adding that, “Our members and staff are ambitious for knowledge and are open and always ready to learn new skills in Legislative practice and procedures”.