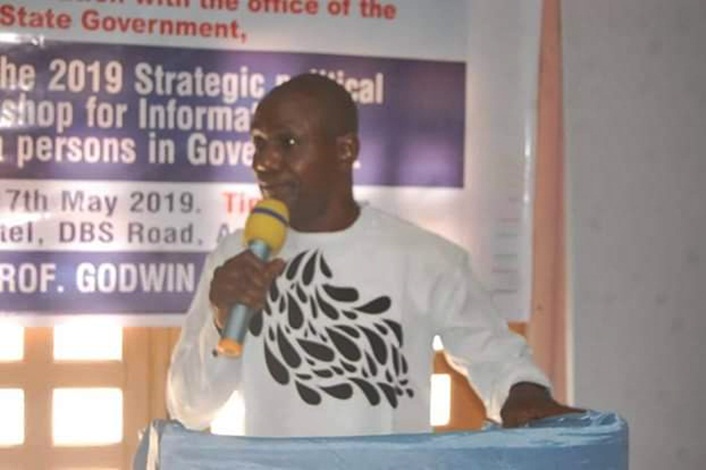 Delta State Commissioner for Information, Hon Patrick Ukah, has stressed the need for information to be made available to the right audience in the right format and at the right time, as an integral part of good governance in constitutional democracy.

Ukah, who was a guest speaker at the 2019 strategic political communication workshop for information, media and communication persons in government of Delta State; organised by the office of the Executive Assistant, Communications to Governor Okowa, emphasised that the primary role of political communication is to bridge the gap between the leaders and the led; propagate government policies and programmes as well as achievements to the citizens while adhering strictly to professional ethics.

According to the Information Commissioner and fellow of the Nigerian Institute of Public Relations (F.NIPR), every strategic communication in governance must be beneficial to government in the sense that it would produce positive outcomes, meet set objectives identify trends, strength, save money and plan for the future, among others.

He expressed optimism that there were bright prospects for effective government information systems and collaboration among communication and media persons to build a Stronger Delta, owing to the enduring structures put in place by the government of Senator Dr. Arthur Ifeanyi Okowa.

Also speaking at the workshop, Chief Press Secretary to Delta State Governor, Mr Charles Aniagwu told participants that the primary assignment for all government media, information and communication persons is to make friends for the governor and government.

He noted that the non-confrontational political communication strategies and policies of Okowa administration is hinged on the need to build good friendship cross political divide and bridge the cap of communication among political gladiators on the one hand and the citizens on the other hand.

Aniagwu, a seasoned media manager and public affairs analysts commended the political communication strategies of the convener of the workshop and Executive Assistant on Communication to Governor Okowa, Dr Fred Latimore Oghenesivbe, describing him as “a credible force to reckon with in media, information and communication profession” whose enviable contributions helped a great deal to positively shape the style of political communication in the state.

In a related development, the Executive Assistant to Governor Okowa on Orientation, Barr. Eugene Uzum said Delta State parades some of the best political communication experts and described Fred Oghenesivbe, EA Communications to Okowa as a man of multifaceted skills and that he brought to bear his wealth of experience to reinvigorate strategic political communication which to a large extent has bridged the perceived gap between government and the good people of Delta State, since his assumption of office in April 2017.

At the end of the intellectual brainstorming exercise on Friday May 17, 2019; participants numbering 120 from the three senatorial districts in the state, were presented with Certificate of Participation.

Osanebi Pays Tribute To His Mother, Says 14 Years After, He Still Find It Difficult To Believe She Is No More.
Delta Speaker Calls For Legislative Efforts To Tackle Environmental, Economic, Others Confronting Rivers, Delta