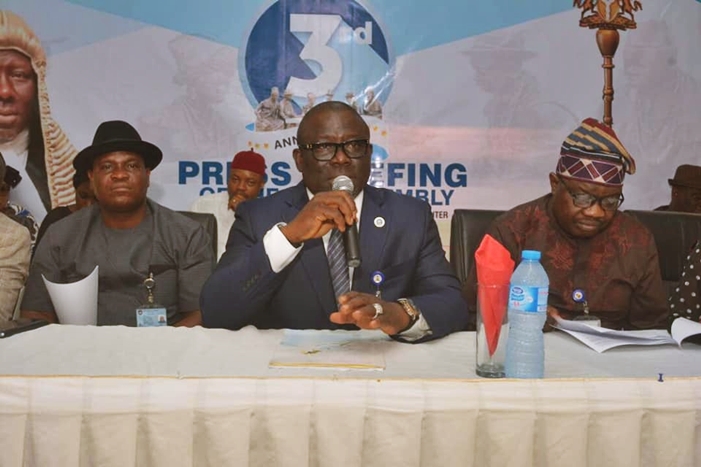 The Speaker of the Delta State House of Assembly, Rt. Hon. Sheriff Oborevwori has extended an unrestricted invitation to Deltans to attend public sittings of the House so as to be acquainted with the legislative process, urging all Deltans to actively participate in the process of law making.

The Speaker stated this on Thursday, 7th June, 2018 at a Press Briefing marking the 3rd anniversary of the Sixth Assembly, christened “Account for Stewardship: the Journey so far”.

Oborevwori while thanking Deltans for entrusting the members of the Assembly with their mandates, urged Deltans to propose bills to the house which would be considered and passed into law. “I urge you not to relent in your belief and support as I give you our firm assurance of providing quality representation. We therefore encourage Deltans to partner with the House by proposing Bills that can enrich our legislative work, and also to attend the public sittings of the House to acquaint themselves with the practice and procedures of the House. I believe such partnership will be beneficial to the House and Deltans.”

The Speaker, while reeling out the achievements of the Sixth Assembly stated that the House has in the period between June 8, 2015 when the Assembly was proclaimed and the 7th of June, 2018, received a total of 75 Bills and 36 Motions. 36 of the bills were Executive Bills, while 39 were Private member Bills.

Giving a breakdown of the bills, Rt. Hon. Oborevwori stated that, “27 Bills have been passed and assented to, while 5 Bills were awaiting assent. He further revealed that 10 Bills are at the Committee of the whole House, while 10 Bills are pending at various Committees of the House. One Bill however was withdrawn by leave of the House, and one failed first reading.”

In this vein, he stated that the Delta State House of Assembly passed the 2018 budget in November 2017, and was assented to on 18th December, 2017. He also posited that the assembly approved the third alteration of the Constitution of the Federal Republic of Nigeria, 1999 (as amended) passed by two-third majority of Houses of Assembly in Nigeria, including the Not Too Young to Run Act.

Delta State Lawmakers in a Group Photograph at the Assembly Complex.

Rt. Hon. Oborevwori hailed the efforts of journalists in disseminating and transmitting the activities of the assembly to Deltans and also using their various medium to highlight the challenges of the state which has given rise to appropriate legislative action. He charged members of the press to remain committed to the highest standards and ethos of journalism practice as the house enters the final lap of the 6th Assembly.

While thanking God for the achievements recorded, the Speaker poured encomiums on the State Governor, Senator Dr. Ifeanyi Okowa for his commitment to the legislature which has culminated in a harmonious executive-legislature harmony.

“Looking back, we have every reason to be grateful to God Almighty for His love, guidance and protection which has seen us thus far. We cannot but also appreciate the Governor of the State, His Excellency, Senator Dr. Ifeanyi Arthur Okowa, for his unwavering support for the Assembly. As an experienced former Senator of the Federal Republic of Nigeria, he sees the legislature as his first constituency and that is why the legislature and the executive are enjoying a harmonious working relationship.”

The Speaker commended the dedication and resourcefulness of the members of the House and assured Deltans that the Delta State House of Assembly is responsive to the yearnings and expectations of Deltans for a proactive and forward thinking government with a high premium on the people.

Oborevwori said, “Let me at this juncture sincerely appreciate my esteemed Colleagues for the team work, unflinching support and invaluable advice towards the successful piloting of the affairs of this dynamic House since the unavoidable change in leadership of the House on May 11, 2017. I also want to commend the management and staff of the House for their immeasurable contributions which culminated in the success recorded thus far.”

“On behalf of my Colleagues, I want to assure our people that we will always work for the collective interest of Deltans and ensure that together we will make Delta State better for all. It is our desire to make Delta State House of Assembly a rallying point for all the people we are elected to serve. We will remain dedicated to service. We will continue to be passionate on our duties in order to improve the lives of our electorates.”