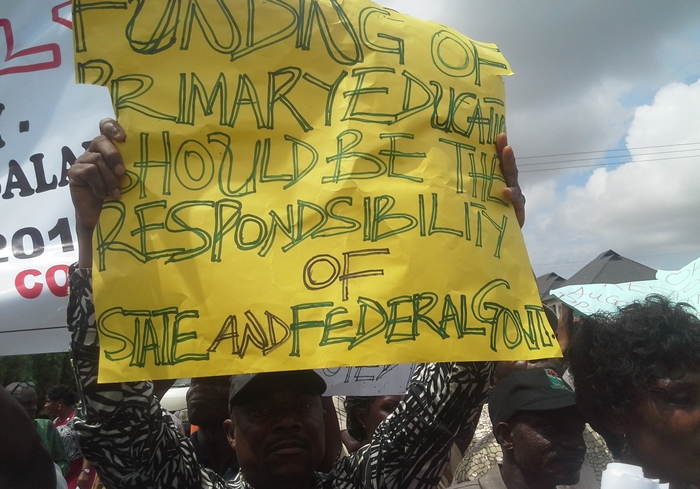 The Delta State Wing of the Nigeria Union of Teachers (NUT) have embarked on a campaign to press home their demands for the salaries of primary school teachers to be deducted from the first line charge from the national allocation, so as to give hope to the teachers in primary schools.

The Union members who expressed their displeasure with the manner at which salaries of primary school teachers are handled, took to the streets of Asaba, the state capital on Wednesday, July 5, 2017.

The teachers who trooped out in their hundreds, chanting solidarity songs and carrying placard cards as they danced to the rhythm of a live procession band, marched from the state’s NUT secretariat through the city center to the House of Assembly and finally to the Government House where security men prevented them from going beyond the gates.

Briefing the Commissioner for Basic and Secondary Education, Mr. Chiedu Ebie who received the Union members at the Government House gate on behalf of the Governor, the Delta State NUT chairman, Comrade Jemirieyigbe Jonathan said the union is calling for the removal of primary school teachers’ salaries from the management of the local governments stating that “It is on the basis of this your excellency that we are here today representing the Nigeria Union of Teachers, Delta State Wing to bring forth before the government of Delta State, the position of Nigeria Union of Teachers.”

Comrade Jonathan averred that local governments lack the capacity and political will to manage primary education. “The management of primary school teachers’ salaries must be removed from the hands of the local governments. We are of the opinion that education is too vital to be toyed with”.

A letter from the National headquarters of NUT signed by the National President, Comrade Michael Alogba Olukoya and Acting Secretary General, Comrade Mike Ike Ene, addressed to Governor Ifeanyi Okowa was handed over to Commissioner Ebie for onward delivery to the governor.

In his response, Ebie said that management of primary schools is the responsibility of state governments while the issue of teachers welfare is with the local governments, pointing out that the governor will look at the demands as presented by NUT and take appropriate decisions.