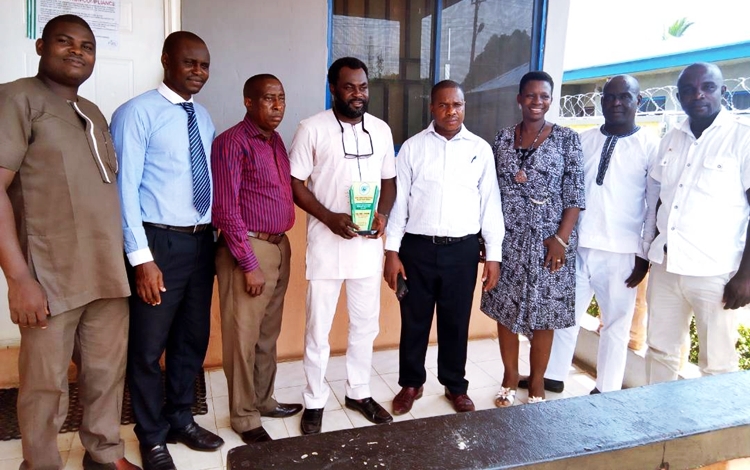 The Awardee Flanked by Executives of Delta State NUJ

The Nigeria Union of Journalists (NUJ), Delta State Council has honoured Hon. Chidi Chinedu with an award of excellence as the Best Councillor in Delta, between 2014 – 2017.

The award was presented to him in recognition of his contributions to the development of his Ewulu community in Aniocha South LGA of the state during his time as the councillor representing ward 9 at the Legislative Arm of Aniocha South Local Government.

Presenting the award to him, the Chairman of NUJ Delta State, Comrade Michael Ikeogwu noted that Hon. Chidi was carefully selected based on investigation carried out on the activities of past Councillors and their relevance at the grassroots politics.

Ikeogwu enumerated some of the achievements of Hon. Chidi to include, singlehandedly engaging four youths of his community to continually maintain the earth road, payment of school fees of some indigent youths of the community, providing of uniforms to members of the Ewulu vigilance group, collaborating with some foreign medical missions to provide health needs for the community people during the 2012 flood disaster in the state and many others.

In his brief but explicit response, Hon. Chidi apologized for not being around to receive the award during the NUJ Press Week of 2017. He thanked the Union for the due recognition, expressing happiness that he was spotted for such magnanimous award based on the little he did prior to his election and in his capacity as Councillor representing his people.

He however, pledged to do more towards giving back to the society.