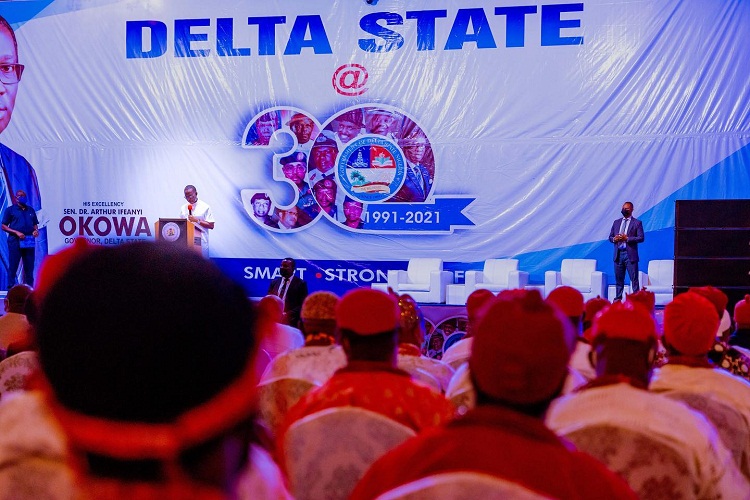 Delta Governor, Senator Ifeanyi Okowa has said, Deltans were now more united than they were when the state was created 30 years ago.

Okowa stated this on Tuesday, August 24, 2021 at a Stakeholders Interactive Forum in Asaba as part of the activities marking the 30th anniversary of creation of the state.

He said that the Forum would afford people the opportunity to reflect on the last 30 years, share experiences and chart a course for the future, recalling that due to political differences at that time, the creation of the state was greeted with cautious optimism.

The governor, however, announced that he was happy to report that skepticism had now given way to belief in a more united Delta.

“Thirty years ago, Delta State was born and given the prevailing political atmosphere at the time, its birth was, understandably, greeted with cautious optimism.

“Indeed, not a few were skeptical about the future of the new State, given its ethnic plurality and the initial feelings of disappointment among those who felt shortchanged in the process.

“But after 30 years of existence, it is gratifying to note that the skepticism has given way to belief, despair has been replaced by confidence, and suspicion has succumbed to understanding and acceptance.

“I dare say that Deltans have come to live as one big, happy family and the State has continued to forge ahead in all indices of human, physical and economic development,” he said.

He expressed gratitude to civil servants – serving, retired or late – who made huge sacrifices to ensure the successful take-off of the State.

“My appreciation also goes to elected politicians and political appointees who have served the state at various times.

“Your ideas, policies, programmes and contributions have helped to raise the profile of Delta to what it is now, a pacesetter in the Nigerian federation.”

Okowa paid glowing tributes to his predecessors, late Chief Felix Ibru, Chief James Ibori and Dr Emmanuel Uduaghan for their immense contributions to the growth and development of the state.

He said that his administration had improved on the growth trajectory recorded by his predecessors and lauded the Peoples Democratic Party (PDP) administrations in the State for the continuity of programmes and policies since 1999.

He added that the new universities created by his administration would commence academic session in September this year, and would provide opportunities to many bright students who, due to limited space, were unable to gain admission into the existing public universities.

“In the tertiary education sector, three existing institutions have been upgraded to universities to broaden access to university education for our bright students, especially in the fields of medicine, engineering, law, ICT and architecture,” Okowa said.

On the health sector, he said that Delta became the first in the country to commence universal health coverage with no fewer than 950,000 enrollees under the scheme, the highest so far in the country, with 487 hospitals officially accredited to provide service.

The governor disclosed that his administration had extended the frontiers of rural-urban integration and urban renewal through massive infrastructure development, especially road projects.

“The 20.28km Obotobo I-Obotobo II-Sokebolou–Yokri-Road in Burutu Local Government Area underscores our commitment to providing infrastructure of the most vital interest and consequence.

“Indeed, the riverside communities of Burutu, Oporoza, Okerenkoko and Benekrukru, amongst others, have been given a facelift with well-paved roads.

“Building on the foundation laid by my predecessors, we have transformed Asaba, the capital city, into one of the fastest growing cities in Nigeria.

“The sprawling ultra-modern Central Secretariat Complex, which is nearing completion, has enhanced the architectural beauty of Asaba landscape,” he said.

On the Petroleum Industry Act 2021 as assented to by President Muhammadu Buhari, the governor commended the passage of the Bill, but with reservations.

“We welcome the passage of the PIA but I must say that the three per cent allocated to host communities from the operating cost of the oil companies is unsatisfactory.

“We are convinced that the five per cent demanded by our state and other oil-producing states is fair, just and equitable in view of the ecological and environmental degradation that the host communities are exposed to from oil exploration.

“We shall continue to push for higher compensation but I appeal to all Deltans, particularly the youth, to be calm and law-abiding. I am confident that we will have the opportunity to make improvements to the law by way of amendment,” the governor stated.

Welcoming guests earlier, Secretary to the State Government, Chief Patrick Ukah, said that at 30, Delta was smart, strong and safe and had brought to the fore the results of three decades of hard work and dedication by the founding fathers of the state.

Stakeholders at the forum commended Governor Okowa and other past leaders for their outstanding accomplishments in the governance of the state.