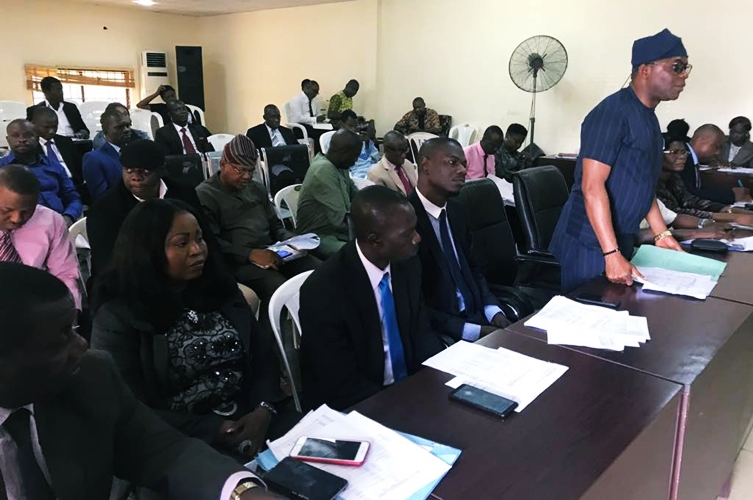 The State Commissioner for Lands, Surveys and Urban Development, Chika Ossai has stated that the Ministry has proposed the sum of N1.5bn for capital projects in 2019 with N15m projected for land use layout and design for all government lands.

Mr Ossai disclosed this when he led top officials of his Ministry and Heads of parastatals under it to defend its 2019 proposed budget estimates before Hon Peter Uviejitobor committee on Lands, Survey and Urban Development.

The Commissioner informed the committee that the Ministry achieved 28.76% budget performance for it’s capital projects between January to October 2018 as only N427.9m was released out of the said the sum of N1.4bn that was approved for the Ministry in 2018 for capital projects.

He disclosed that N20m has been proposed for surveys for all government lands, N10m for survey and demarcation of local government boundaries, N880m for acquisition and compensation of acquired land and N30m for compensation for the Delta State Independent Power Project site as well as N246m for the purchase of buildings.

While stressing that the Ministry was determined to live up to expectations in line with its mandate, the Lands Commissioner noted that N5m was proposed for the removal of illegal structures, N1m for National Council and other meetings, adding that the projected revenue for land regularizations was N150m and N2bn for ground rent while processing of certificate of occupancy was N600m.

He said the Ministry would achieve more given the projections and modalities put in place for revenue generation stressing that the Committee should assist by appropriating more funds to the Ministry to achieve set goals.

The Chairman House Committee on Lands, Surveys and Urban Development, Hon Peter Uviejitobor said the Committee took note of the areas the Ministry performed well and urged the Commissioner to do more in the areas that needed improvements.

The Lawmaker who represents Udu Constituency in the House noted that the Ministry utilised and prudently managed the approvals and releases made to it by the state government.

Hon Uviejitobor assured that the Committee would look into the 2019 estimates made by the Ministry in order for it to achieve more in the 2019 fiscal year.