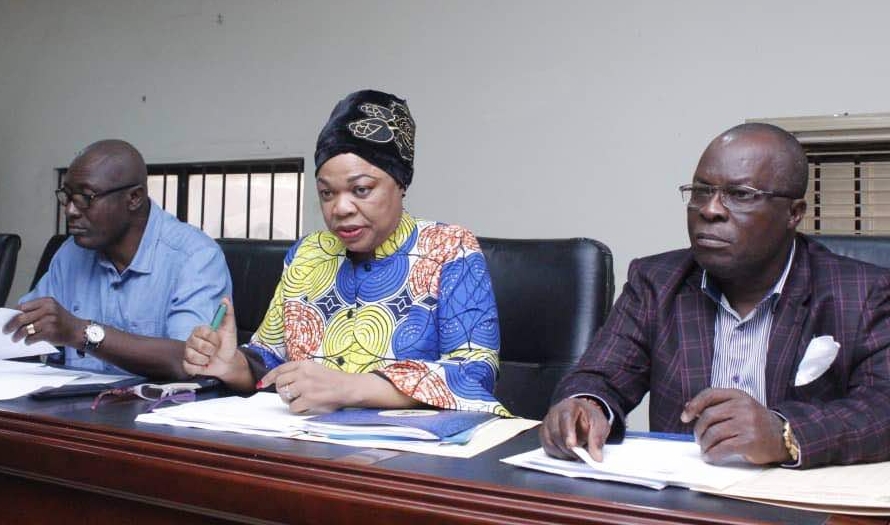 …As Ministry of Basic and Secondary Education Declares 46.2% Performance For 2018 Budget.

The Delta State House of Assembly Committee on Education has directed all Tertiary Institutions in the state to furnish the committee with their income and expenditure for the 2017 and 2018 financial year.

The Chairman, House Committee on Education, Hon Angela Nwaka gave the directive when the Ministry of Higher Education led by the Commissioner, Mr Jude Sinebe and heads of tertiary institutions in the state appeared before the Committee to defend its 2019 budget estimates.

Hon Nwaka said though tertiary Institutions had the power to generate income and spend, there was need for transparency in line with laid down procedures and fiscal responsibility law of the state as passed by the state house of Assembly.

She said education was a key sector in any nation hence the need to straighten tertiary institutions in order to live up to expectations in churning out qualified and adequate manpower for the nation’s development needs.

Hon Nwaka noted that the Committee was determined in doing it’s best to assist the Ministry of Higher Education and tertiary institutions achieve their set goals.

The Commissioner for Higher Education, Mr Jude Sinebe said tertiary institutions in the state do send their monthly reports to the Ministry of Finance on their income and expenditure.

The Higher Education Commissioner said the Science and Environmental Science Faculty buildings at Abraka and Asaba campuses were currently ongoing and highlighted the decline of students in Colleges of Education.

Mr Sinebe appealed to the Committee to appropriate more funds to the Ministry to enable it meet up with its obligations and commended Governor Ifeanyi Okowa for embarking on various projects in the Delta State University.

In a related development, the Commissioner for Basic and Secondary Education, Mr Chiedu Ebie has said that the Ministry achieved 46.2% performance in the capital budget as at August 2018.

Mr Ebie disclosed this when he led top officials of the Ministry and heads of tertiary institutions to defend the Ministry’s budget before the Hon Angela Nwaka led House Committee on Education at the state House of Assembly complex, in Asaba.

Mr Ebie said the 2018 approved capital budget of the ministry was N16.4bn with total commitment of N18.7bn while the total release was N7.6bn as at October 2018.

He disclosed that the Ministry had an outstanding indebtedness of N12.6bn while indebtedness from 2015 to 2018 was N18.7bn hence, the need to make provision to cater for the payments in 2019.

Mr Ebie further disclosed that the Ministry generated N200.6m between January to September 2018.

He appealed for increment in the capital budgetary provision for the Technical and Vocational Educational Board from N750m to N1.5bn to accommodate the upgrade of additional technical colleges and establishment of new vocational centres.

The Commissioner also made a case for increase in the budgetary provisions of the Post Primary Educational Board from N75m to N150m and SUBEB from N1.2bn to N1.5bn as well as increment in the capital budgetary provision and personnel cost.

The parastatals under the Ministry including SUBEB, PPEB, and Technical and Vocational Education Board highlighted their challenges and achievements recorded in 2018.

The Chairman House Committee on Education, Hon Angela Nwaka and other members of the Committee urged the chairman of SUBEB, Hon Sunny Ogwu to synergize with the House when executing projects in their constituencies in order to ensure proper supervision.

They stressed the need for proper supervision of teachers and school heads to enhance high academic performances.