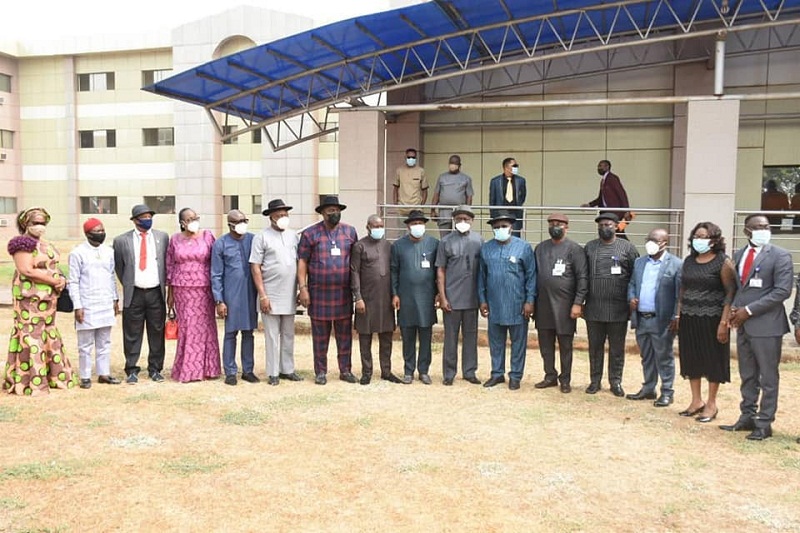 Critical Stakeholders in the Delta State education sector has pledged their total support for the planned upgrade of three higher institutions in the state to status of universities.

At a public hearing on three bills for the relevant laws to establish the universities, organized by the State House of Assembly Committee on Education on Friday, February 19, 2021, the stakeholders commended the initiative as it would further revolutionize higher education in Delta State.

The well attended session, held at the State Assembly Complex in Asaba to brainstorm on the proposed upgrades of the three higher institutions to universities, those who spoke in their submissions acknowledged the fact that the upgrades is in tandem with new policies on education.

The Speaker of the State Legislature, Rt Hon Sheriff Oborevwori while declaring the exercise open, said he was particularly pleased with the large turnout of stakeholders and called for robust contributions to the making of the proposed laws.

Oborevwori stated that presence of so many stakeholders in the educational sector, to the public hearing despite the short notice, was commendable as their inputs were germane to the enactment of the proposed laws.

The Speaker explained that the public hearing was to enable stakeholders make their contributions in the spirit of inclusiveness, stating that all views, opinions and contributions will be treated with the respect they deserve.

He said the large interest has rekindled hopes for the educational sub sector in in the state, stressing that lawmakers would work in tandem with the Executive arm of government to ensure the prompt and smooth takeoff of the three proposed universities.

Rt Hon Oborevwori urged all critical stakeholders to be actively involved in the initiative for the new universities as all and sundry will be imparted one way or the other by their establishment.

Describing the public hearing as a worthwhile venture, the Speaker commended members of the House Committee on Education for their commitment to the assignment given to the Committee by the House.

The Chairman, House Committee on Education, Hon Charles Emetulu, explained that the Delta State Government was responding to stimulus of the federal government.

Hon Emetulu stated that with the gradual phasing out of Higher National Diploma, HND, low interest on National Certificates of Education, NCE, and high demands for university education, the initiative to upgrade three existing higher institutions in the state to universities was a welcome development.

The Lawmaker explained that the bills which have passed first and second readings on the floor of the house, were further being subjected to public hearing to garner the inputs of stakeholders.

Prof Muoboghare noted that the colleges of education have continued to experience a decline in the number of students seeking admission, while the federal government was gradually phasing out the HND programs, maintaining that the decision to upgrade the College of Education Agbor and the Delta State Polytechnic Ozoro to Universities is a welcome development.

The Commissioner for Basic and Secondary Education, Chief Patrick Ukah, expressed happiness that the public hearing had provided a platform for stakeholders to make their inputs on the proposed plans by the state government to upgrade three existing tertiary institutions, stressing that it should be embraced by all.

Chief Patrick Ukah disclosed that over forty thousand students graduated from public secondary schools last academic session in the state, who were now being faced with stiff cut off marks and low admission quotas in their quests for university education.

The Commissioner for Technical Education, Mrs Gbubemi Kpenosen-Ikolo, said her ministry is in total support for the establishment of the three new universities and have thrown it weight behind it.

Mrs Ikolo disclosed that the intervention of the state government in technical education has heightened the interest and increase in the enrollment of students from 2,424 in 2014/2015 to 8,227 in 2020/2021 academic year.

She expressed optimism that the increasing population of students turn out from government Technical Colleges and most private secondary schools offering technical courses would serve as feeders to the proposed University of Science and Technology, Ozoro.

They expressed happiness that the schools have the infrastructures and man-powers needed for the takeoff of the universities, even as the authorities of Delta State University, disclosed that only twenty percent of those that apply yearly for admission into the university get admitted into the institution.

Representatives of the Itsekiri Liberation Group, the Riverine Community of Nigeria and Agbor Community, in their presentations commended the Okowa administration for the timely decision of upgrading existing tertiary institutions as it would also boost the socio-economic fortunes of the state.

The Itsekiri Liberation Group and Riverine Communities of Nigeria, however appealed that similar higher institutions should be cited in Itsekiri and ijaw communities of Delta State.

stakeholders are all in agreement with the upgrade of the institutions to university status.

The Lawmakers stated that even with the upgrade of the three institutions, there was still need for more new universities in the state to accommodate the number of brilliant students seeking admissions into the university.