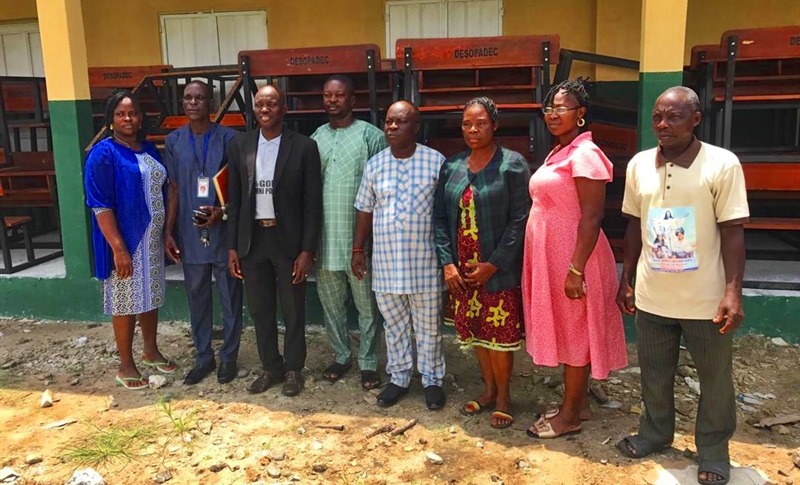 Ahead of the inauguration of the Seventh Delta State House of Assembly, the Member Representing Udu Constituency in the House, Hon Peter Uviejitobor has assured that his second tenure will be characterized with positive development in Udu local government area.

Speaking during the flag off of distributions of 476 students furnitures to Ten schools in Udu council area, Hon Uviejitobor said the constituency will witness more government presence during the second tenure of Dr Ifeanyi Okowa.

The Lawmaker, said the 2019 general elections was the first time since the advent of the present political dispensation that the people of Udu was voting overwhelmingly for a ruling political party in the state.

While commending the people of Udu for the votes of confidence on him and the governor, Hon Uviejitobor stated that experience gathered during his first tenure would be of great values in his strives towards raising standards in Udu council area.

Hon Uviejitobor disclosed that he had approached the Delta State Oil Producing Area Development Commission, DESOPADEC for the school furnitures in line with his electioneering promised to the people.

While emphasizing the need for more basic infrastructures in schools across the local council area for effective academic activities, the Lawmaker who is the Chairman, House Committee on Lands, Survey and Urban Development, said the 476 Furnitures that were being distributed was the first phase of the exercise.

Hon Uviejitobor commended DESOPADEC for the approval, promising to continue to collaborate with the state government and its agencies in attracting more development to Udu local government area.

The Head Stores and Warehouse, DESOPADEC, Prince Monday Emuowho who accompanied the Lawmaker on the distribution of the Furnitures, said Udu local government is one of the mandate areas of the commission hence the intervention.

He said the Furnitures were of high qualities and commended Hon Uviejitobor for ensuring that DESOPADEC projects in his constituency were executed to specifications.

Prince Enuowho assured communities in DESOPADEC catchment areas of more DESOPADEC presence, even as he charged the communities to remain at peace with their neighbors for development to thrive in the areas.

The Education Secretary, Udu local government area, Hon Daniel Tishene and the heads of some of the benefiting schools in their remarks commended the efforts the state government, DESOPADEC and Hon Uviejitobor for the provision of the educational materials.

They however appealed for more government concern the provision of schools infrastructures in the local government area.