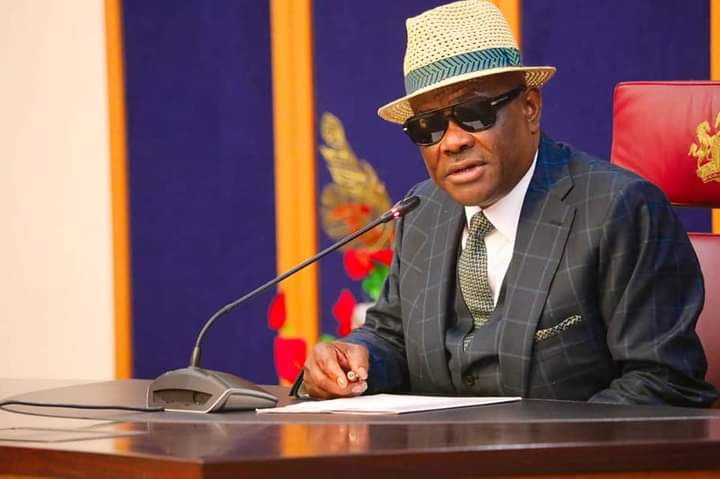 Rivers Governor, Nyesom Wike has again, come under fire for his purported claims of the receipts of full payment of the 13% derivation arrears to South-South states by the Federal Government.

The duo of the Senator Ovie Omo-Agege and Comrade Adams Oshiomhole were also knocked for falling for it and deceiving the public with the unverified claims.

Decrying this ugly development in the heart of Niger Delta, a pressure group known as Deltans Life Matters described Governor Wike’s declaration on derivative receipts by South-South Governors as too economically illiterate to make headlines.

In a statement signed by Christian Moses Abeh, Gabriel Mamuzo and Bartholomew Utele; Global Coordinator, Deputy Global Coordinator and Secretary-General of the group respectively, they extolled the transparency of Governor Ifeanyi Okowa’s led-government in financial expenditures and lauded the gigantic development projects visibly dotted across the state.

The group’s statement reads below as obtained by this medium.

In recent times, enemies of the Niger Delta especially Senator Ovie Omo-Agege and Comrade Adams Oshiomhole have harped on the “revelation” by another enemy of the Niger Delta, that South South Governors have received from the Federal Government the full arrears of 13% derivatives owed them since 1999. While this assertion by Wike is patently false and designed to cause confusion in the region, one must look at the intent of Nyesom Wike before jumping into conclusions.

Before we do that, we must not give credit to Wike for being the righteous Governor of the South South while the rest should be demonized. Governor Okowa was the first Governor of the South South to disclose that his government had been promised a refund of 240 billion naira from the derivative funds to be paid in instalments for 5 years. This revelation came in April 2022 when Dr Ifeanyi Okowa sought a bridge Finance from a bank as a draw down on the expected refund from the Federal Government.

Dr Okowa explained to the world that the 150billion bridge finance was not a conventional loan with a huge interest element.

As at today, contrary to wild speculations by a highly credulous populace the Dr Okowa administration has drawn only the sum of 30b naira on the bridge Finance. For the benefit of hindsight, Dr Okowa had told Nigerians in April, 2022 that he needed the bridge loan to finance some critical legacy projects like the Delta Leisure Park and Film village Asaba, the Koka junction flyover at Asaba as well as take care of outstanding pension commitment to state and Local Government pensioners in the state’s contributory pension scheme amounting to 20 billion naira and 10 billion naira respectively.

This factual disclosure puts paid to the financially illiterate speculation that the 150billion bridge finance was used by Dr Okowa to fund his Vice Presidential ambition.

These types of crazy, malicious and illiterate speculations are peddled by those who do not know how government works.

Unfortunately, those who know like Nyesom Wike, Senator Ovie Omo-Agege and Comrade Adams Oshiomhole have stood the truth on its head just to discredit the Okowa administration and indeed South South Governors just to score cheap Political points.

Nyesom Wike, from whom all these malicious propaganda sprang is looking for people to drown with him in his journey of perdition. Unfortunately, it is difficult to vilify Dr Okowa as his achievements are in the public domain.

For the records, Dr Okowa has been rated as a financially prudent Governor whose judicious use of public funds has been his signature tune. Dr Okowa’s administration is the only one in the 36 states of the Federation that has and manages four Universities and seven tertiary institutions.

Delta state is the only state in Nigeria that has 31 urban towns, each competing for access to state resources.

Yet, the Delta state Government under Dr Okowa’s watch is finishing strong with strings of accomplishments ranging from a sprawling, ultra modern State Workers secretariat that has become a cynosure in the state capital of Asaba to the Asaba leisure park and entertainment village and 15 state of the art Technical colleges, with 6 fully completed and equipped while 9 others are in varying stages of completion.

On roads, the Delta state Government under Okowa’s watch has completed 1000km and ambitious storm water control projects at Asaba and environs while replicating same in Warri/Effurun axis.

While Nyesom Wike prides himself in building bridges in Portharcourt alone, Dr Okowa has embarked on 22 bridges, some of which are the Ovwor-Effurun-Otor bridge, Agbarho-Orherhe road and bridge, Kwale-Beneku ongoing bridge, Trans-Warri roads and bridges and the Koka fly-over bridge amongst others.

On youth empowerment, Dr Okowa’s administration has empowered thousands of youths through entrepreneurial schemes while 1.1 million Deltans have been enrolled into the state’s contributory health scheme.

Dr Okowa is also credited with the completion of the Asaba Specialist Hospital and the establishment of the Advanced Diagnostic Centre and mother and child Hospital at Owa Alero.

We would not forget Dr Okowa’s giant stride in upgrading the Stephen Keshi Stadium at Asaba into an international standard stadium as well as upgrading and concessioning the Asaba airport for improved service delivery.

From the foregoing one can conveniently say that Dr Okowa, the Governor of Delta state and by the grace of God the incoming Vice President of the Federal Republic of Nigeria has paid his dues. He deserves commendation and not condemnation from his traducers. He has a lot of experience to export from Delta state to the National level.

Okowa is unstoppable and those who are planting thorns and thistles on his way to the top are only fuelling his resolve to do more for Delta State and Nigeria.