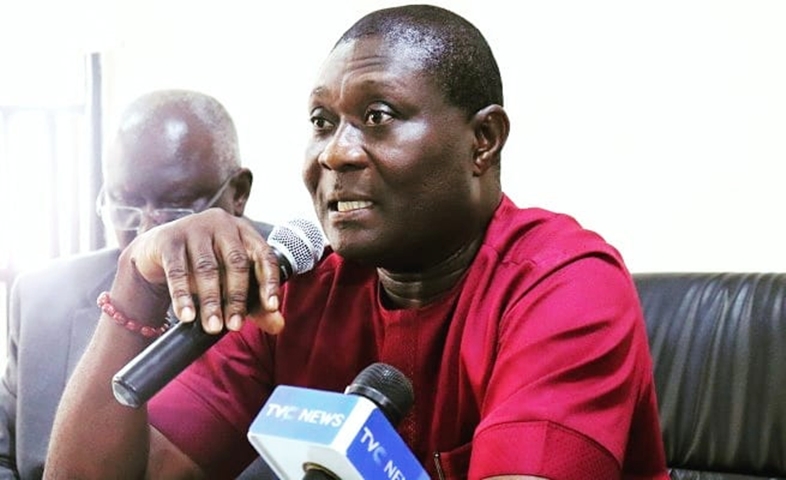 Delta State Government has announced the closure of a section of the Asaba-Illah-Ebu-Uromi-Abuja Federal Road following the sudden collapse of the Anwai River culvert in Asaba Capital Territory.

The Commissioner for Works, Chief James Augoye made the disclosure on Tuesday, November 12, 2019 at a press briefing in Asaba, the Delta State Capital.

He said that although, the state had commenced palliative measure on the culvert, he however warned commuters, particularly heavy duty vehicles to beware of the dangers posed by the collapse.

Chief Aguoye, flanked by his Information counterpart, Mr Charles Aniagwu, urged motorists to maintain speed limit on the narrow road, adding, “It will be very hazardous to allow vehicles to continue to ply the section of the road. We have written to the Federal Ministry of Works to alert them of the looming danger on the road. So, we implore Dangote trucks and other heavy duty vehicles to avoid that section of the road for now.”

On the cost implication of repairing the road, the commissioner said that what is being done was palliative measure on the road, saying that they are still waiting for the comprehensive report from the field engineers of the ministry of works and assured that, “as soon as we get the report from the field, we are going to tell you how much will be used to replace the collapsed culvert”.

The works commissioner also debunked the speculation that the Udu Bridge in Udu Local Government Area, constructed in 1970s, was near collapse but confirmed the collapse of a culvert and not a bridge in Ughelli as erroneously reported in the social media.

He explained that engineers from his ministry had carried out investigations on the Udu Bridge and discovered that it was not a collapse sign but mere vibration of the hand rails and measures were being put in place to renovate the rails and replace missing slabs on the bridge.

According to the works commissioner, the state government would continue to accord priority attention to the rehabilitation of both state and federal roads especially the Benin-Sapele-Warri Expressway.

Chief Augoye said the entire stretch of the road was failing progressively except for areas where the state government had carried out palliatives, disclosing that the Ministry had drawn the attention of the Federal Government to carry out total repair work on the road for the benefit of the people of the State.

On the ongoing Okpanam road construction, the works commissioner restated the desire of the State Government to see the completion of the phase one of the project as soon as possible, and added that once the first phase is done, the State Government will commence with the Phase II by way of awarding the contract.

“The priority of the State Government for now is to ensure the completion of Phase one of the road which has taken so long,” the commissioner stated and assured that no aspect of the Okpanam road project would be left undone, saying that the road is critical to the Delta State capital territory.

Also speaking, the state Information Commissioner, Mr Charles Aniagwu said a lot was being done by the State government in road construction despite the rains, disclosing that construction work had commenced on the camp 74 road, through the Ralph Uwechue road and terminate at the Akpu Junction, near the Legislative Quarters.

Present at the briefing were the Permanent Secretary, Ministry of Information, Mr. Paul Osahor and his Ministry of Works counterpart, Engr. Fred Dafiogor.