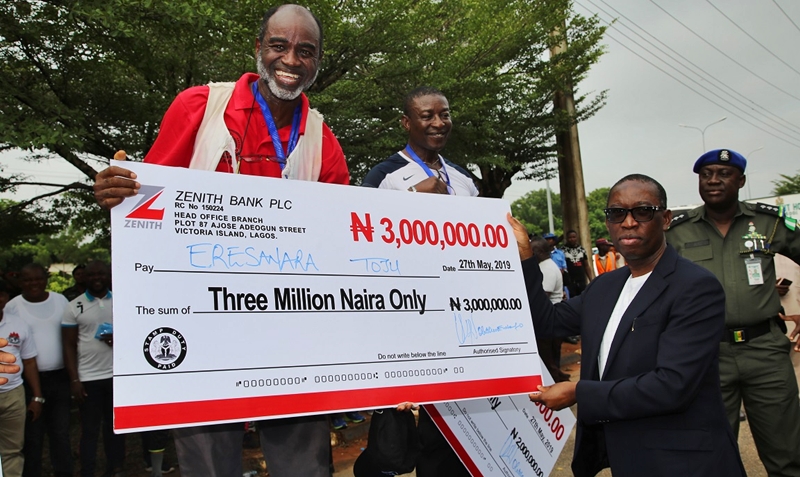 As part of activities lined up for the inauguration of Senator Dr Ifeanyi Okowa as Governor of Delta State for second term, elders of the state took a 10 kilometer walk in an event which the governor described as good for health and fitness.

The event christened, Delta State Governor Annual Elders’ Tournament Walk, with the theme, “Walk to Health” commenced at Abraka Junction in Asaba through Dennis Osadebay Way, Nnebisi Road, Anwai road through to Government House, Asaba.  It was a 10 kilometer walk that was strictly for Deltans aged 55 and 70 years without gender discrimination.

Governor Okowa who received those who participated in the walk at about 8 am on Monday, May 27, 2019 at Government House, Asaba, expressed joy that elders came out to participate actively in the walk, stating, “I am glad that this tournament is taking place as it will help us to keep fit and be healthy.”

“Nigerians need to be encouraged to take a walk as it is good for our health and brain and I want to assure everybody that this tournament will be an annual event”, he said, adding “I want to urge you to always take a walk at least twice a week so as to remain in good health.”

While commending the organizers and participants in the walk for the colourful tournament, Senator Okowa promised that the next tournament would be broken into various categories so as to get the best from the participants.

Earlier in their separate addresses, Chief Lulu Onobaifo and Sir Lawrence Oshiegbu on behalf of the organisers of the tournament, disclosed that the tournament was meant to ensure that Deltans keep fit and healthy, assuring that the next edition would be more colourful and categories created to cater for the youths. The winner of the tournament for the men’s category was 55-year-old Dr Eresanara Toju, with tag number 057, who arrived the finish line at the Government House at about 8.04 a.m. to win N3 million.