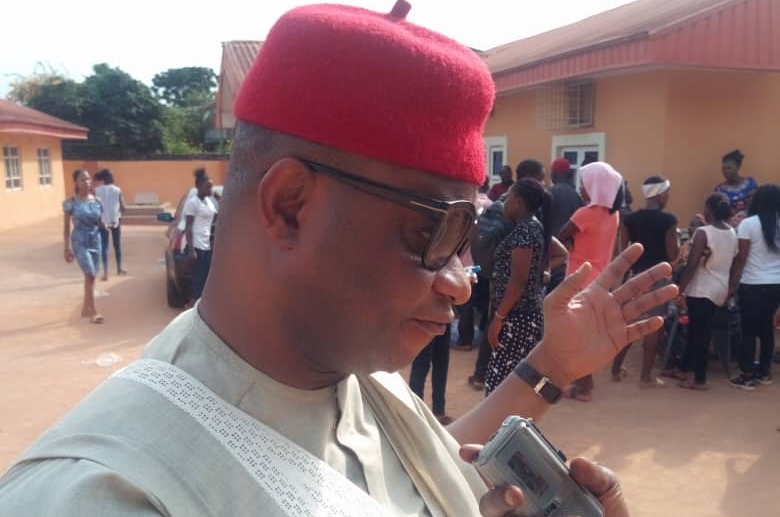 The people of Issele-Mkpitime, in Aniocha North Local Government of Delta State on Saturday, march 9, 2019 unanimously expressed their profound gratitude in kind to Governor Ifeanyi Okowa and the member representing them in the Delta State House of Assembly, Hon. Engr. Emeka Nwaobi by giving the duo unanimous massive votes for their return as governor and member of the House of Assembly respectively.

Voting for the Governorship and House of Assembly elections in Issele-Mkpitime particularly witnessed a massive turn out of voters, including the young, the women the men and the elderly who trooped into the Enu-Ofu Primary School voting centre for Ward 5  to cast their votes.

At the end of voting, by the results displayed by the Polling Officers, Governor Okowa of the Peoples Democratic Party (PDP) polled a total of 671 to Chief Great Ogboru of the All Progressives Congress (APC’s) 297, while for the House of Assembly, the incumbent member, Hon. Engr. Emeka Nwaobi polled a total of 663 to beat his closest opponent of the APC who polled 301.

The people of Issele-Mkpitime fought back the antics of the opposition parties, who resorted to vote-buying even at the voting venue, as they paid N3,000 to each of such voters. But the the youths of the community regrouped and made dogged moves that finally neutralized the vote buying situation and got the seemingly chaotic development back under control.

A notable figure and member of the community, a renowned media personality and accomplished businessman, Chief Henry Nonso Ugbolue gave insight into the turn of events and why the Issele-Mkpitime community voted massively for the duo of Okowa and Hon. Engr. Emeka Nwaobi.

Chief Ugbolue who described voting in Issele-Mkpitime to be largely peaceful said the community is a PDP enclave, pointing out that this is a known fact. “And because of this, some people got panicky, but we thank God that everything went well and good,” he said.

Pointing out that the PDP won with landslide in Issele-Mkpitime because of Okowa and Nwaobi. He commended the INEC officials, the security agencies, including the DSS for performing exceptionally well and containing a crisis situation, he prayed that all will go on well at the collation centre. “But from Issele-Mkpitime here, we have delivered Governor Okowa and Engr. Emeka Nwaobi who is returning to the Delta state house of Assembly.

“For the first time, we feel like a people, and we feel properly represented in the House of assembly. Look around, you can see the show of love for Governor Okowa and Engr Emeka Nwaobi. Our people turned out en masse to vote for them because today, we can boast of a nylon tarred road. In fact from Issele-Uku main entrance by the Benin Asaba Express road to Issele-Mkpitime is less than 10 minutes drive. But now, It’s not about the road any more, and you can do it now in five minutes. And we have Governor Ifeanyi Okowa and Hon. Engr. Emeka Nwaobi to thank for this.

“That was why we turned out en masse, to vote back Governor Okowa and Emeka Nwaobi . And as you can see, the people are resolute in the mission to defend their votes, having been conscientised to do so, as even a 10 year old in the community will tell you that our people will always defend their votes,”Chief Ugbolue said.