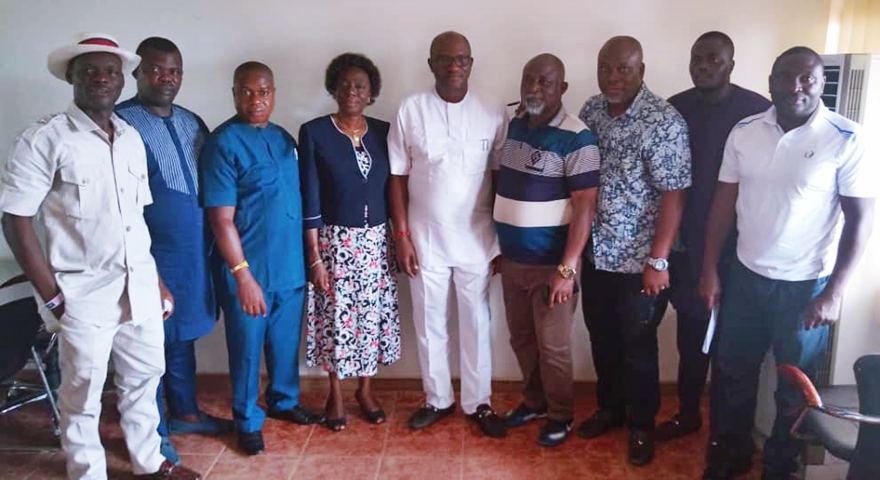 The Delta State Oil and Gas Commissioner, Chief Emma Amgbaduba has said that grassroots football tournaments such as the Sherrif Mulade Ijaw/Itsekiri Peace and Unity Cup Competition is critical for discovering and harnessing potential future football stars and talents.

The Commissioner stated this at his office in Asaba after receiving the official jersey for the tournament from the chairman of the Local Organizing Committee, Honourable Kenneth Nwaomucha who led his committee team on a courtesy visit to the commissioner.

Chief Amgbaduba commended the organiser of the tournament, Comrade Sherriff Mulade and members of the LOC, describing the football tournament as an instrument for peace building and unity among the two ethnic tribes taking part in the competition.

He called on government at all levels, sports lovers as well as wealthy individuals in the region and state to invest in grassroots sports development to uncover hidden sporting talents.

According to him; “The essence of this biannual football tournament is to promote peace, unity among the communities that will participate in the soccer fiesta and provide recreation to citizens.This tournament is more like a cultural heritage that must be sustained.Our people value this competition more than the English Premier League or the European Champions League.

“The competition gives us opportunity to look at the people playing in the tournament and pick potential football talents from there.

“The grassroots soccer competition which started two years ago has led to the discovery of football future stars for the state and country at large. And not only that, during the tournament the whole region is in a celebration mood and for a first time visitor, the experience can be described as a carnival of culture, football and dance.”

The Commissioner promised to ensure the continuity of the biannual soccer event, assuring that he will be working together with the LOC in ensuring that no stone is left unturned so as to have a successful tournament.

Speaking on behalf of the LOC, the chairman Honourable Ken Nwamoucha commended the Commissioner who is also a prominent front role palace chief in Ijaw land for his continual support and encouragement towards the success of the tournament over the years.

The 2019 edition of the Ijaw/Iteskiri Peace and Unity Cup Football Competition will kick off next month as preparations for a hitch free tournament are in top gear.