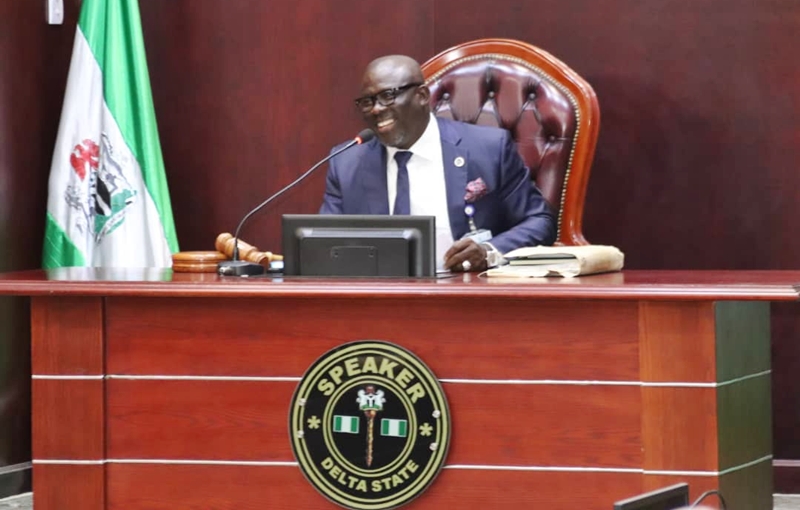 Contrary to feelers of an impending impeachment of the Speaker, Delta State House of Assembly, Rt. Hon. Sheriff Oborevwori as reported by popular  tabloid, Secret Reporters, a Vote Of Confidence was today passed on the Speaker and the leadership of the Seventh Assembly.

According to the report published on March 2, 2020 by the investigative news website, “seventeen lawmakers have decided to move for impeachment against Sheriff while six are undecided but may be swayed to join the pro-impeachment group”, adding, “according to credible sources, the Speaker’s crime is his inability to arm-twist the Governor into releasing money for them to play around with and share to followers and constituents as was done in the past.”

Opening debate on the motion, Hon Elekeokwuri said the motion was based on the achievements of the house under the leadership of Rt. Hon. Sheriff Oborevwori, stressing that the vote of confidence would spur them to do more for the state legislature.

Hon Elekeokwuri stated that the leadership has done well, maintaining that bills passed in the house have immensely helped the growth of the state with particular reference on the job creation law which he noted has brought dividends of government to the people.

Hon Elekeokwuri commended the training and retraining of members even as he described the House as very stable, noting that the stability of the house is a clear pointer to the fact that the leadership has done well.

The lawmakers stated that thoughts of impeachment and legislative bickering were far from the seventh Delta State House of Assembly following the peace and understanding they are enjoying from the leadership.

They said they no longer think of moving the mace, or signing documents in the middle of the night to remove the Speaker, stressing that the leadership have been all encompassing.

The Lawmakers said even new members have never been made to feel they were neophytes, emphasizing that they are at peace to support the motion on behalf of their various constituencies.

The legislators also commended Rt. Hon. Oborevwori for not being carried away by the aura of power, describing him as humble, competent leader who has proved to be different from others.

The Speaker, Rt. Hon. Sheriff Oborevwori thanked the house for the show of love with a promise to improve on the leadership drive.

The Speaker stated that the explicit vote of confidence reposed on the Leadership of the House was encouraging and assured that he will continue to lead the House by the consensus of majority of Members.

He called for continued support to the Leadership of the House.