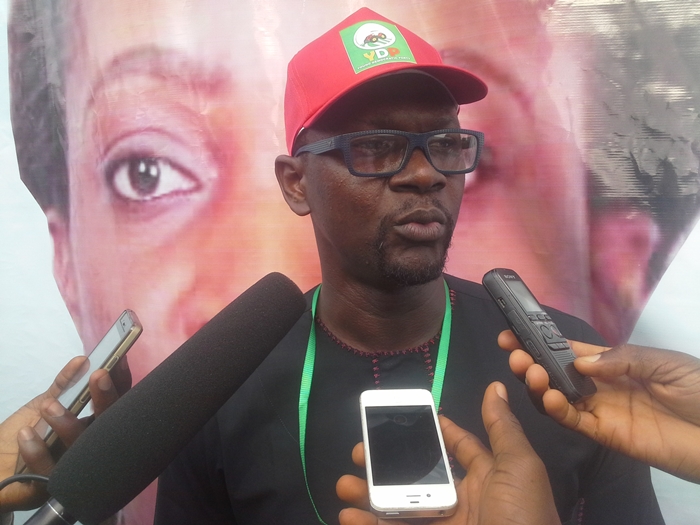 The Delta State Chairman of the Young Democratic Party (YDP), Barr. Festus Ofume has described the present PDP led government in state as a failure stating that for the past 18 years since the return of democratic rule in the country, the state has known no meaningful development.

Ofume who stated this in a media chat with newsmen in Asaba said that Deltans across the state and in diaspora are unhappy with the crop of public officers who have continuously mortgaged the development and bright future of the state in their pockets to the detriment of the people.

While commenting on the 26th anniversary of the creation of Delta State, the party chairman said, “Well if we have to give a mark of Failure and Pass to the present level of development in the state, you would agree with me that you will not record a pass mark for a state like Delta that is 26years old. We have not seen what is expected of the developmental growth of a 26 years old state. Deltans can attest to the fact that Delta has not lived up to the developmental recognition of a 26 years old state.”

“If we look at what is going on currently in Delta State, you would agree with me, if compared with other states like Lagos, where we have seen how development comes in both areas of infrastructure and human capital development, you would agree with me that Delta has not done anything and we will attribute this to no other person but to what we call bad and poor leadership of the PDP administration that has been holding power in Delta State since 1999,” the Chairman added.

Speaking further, Barr. Ofume submitted that the factor that has hindered the development of Delta State is the lack of proper administration and lack of proper governance, averring that continuity of government policy is a key factor to the robust development of projects in any state because the time that is allocated for governance or tenureship of an elected position may not always be enough for one to complete what he or she has started be it project or policies.

“For instance, if you look at what is happening in Asaba, when it rains we see what happens. A state that is 26 years, should be able to boast of at least a city that should be reckoned with. Asaba has been the capital of Delta State from inception for the past 26 years and if you go around the city of Asaba, you will weep because there is nothing to show that this place is actually a state capital.

“Look at the roads how erosion drives people away from their houses, what is causing that? It is because the current administration and the previous administration do not understand what governance is about. Governance is all about continuity. A situation whereby you will see a governor that enters into an office and will not continue with the policies and work of the past administration (who are of same political party) is absurd. We have situations whereby roads like, Infant Jesus, DLA road, Mariam Babaginda, Okpanam road and others have been abandoned and if you ask questions, you will be told that these contracts have been awarded by the past administration. It is ok, we understand that it has been awarded and the money has been embezzled but there is continuity in government, you review and if the needs arises that the roads should be constructed, you re-award them.”

“YDP is about bringing governance to the people, people will see the effect of governance. If YDP has been in Government for the past 18 years, with the ideas we have, there would have been a tremendous change in Delta State. I give kudos to former Lagos state governor, Senator Bola Ahmed Tinubu, for the vision that he has for Lagos State. He took Lagos state as his pet project and you can see that his successors Fashola and Ambode have improved of the developmental projects of the State as instituted by the leader of the ruling party in the State since 1999.

“Non continuity of government projects where each administration feels that it is better for them to start a new project and complete it so that at that point the glory will be given to them. The glory should be given to the party not individual. If the idea of continuity is understood, that in itself will solve all the problems and that is what YDP Stands for and will institutionalize in Delta State.”

So when you look at these things you begin to see that the past and present administrations in Delta State do not actually understand what governance truly means and it has been the PDP led government up to this very moment.