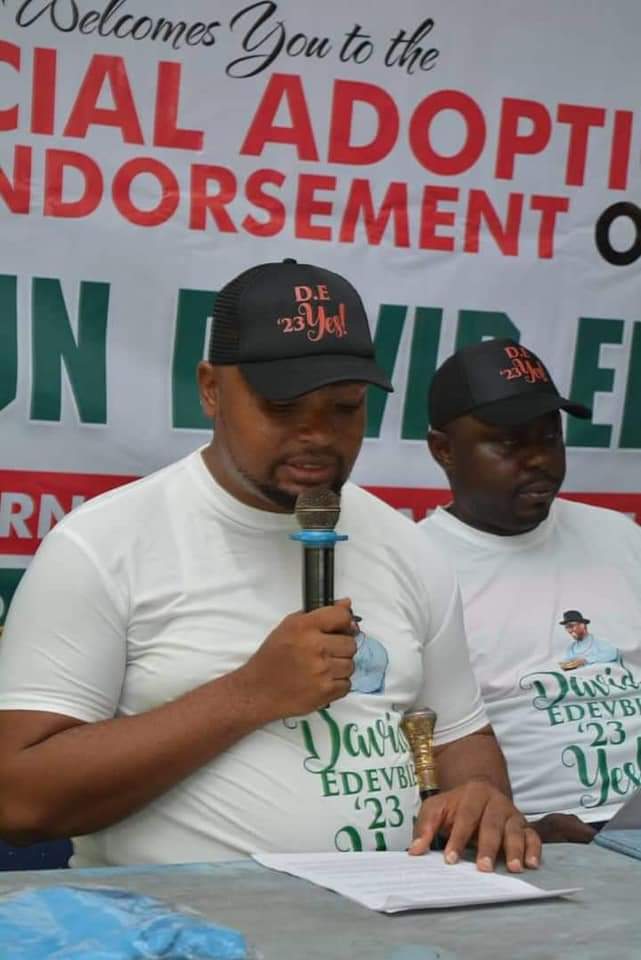 Youth Leaders of the G5 Ethnic Nationalities of Delta, on Tuesday during their extraordinary assembly endorsed and adopted Olorogun David Edevbie as their gubernatorial candidate of choice ahead of the 2023 general elections.

In a communique read by secretary general of Ndokwa youths, Snr. Comr. Idi Presley, the youth leaders from the G5 region decided to adopt Olorogun David Edevbie due to his track records.

“That after a careful appraisal of all the Gubernatorial aspirants, we have decided to adopt and endorse Olorogun David Edevbie as the choice candidate of all youths from the G5 ethnic nationalities.

“While we are aware that, as leaders of our various ethnic nationalities, we are supposed to be apolitical, we are not happy with how we have been treated in the last seven years and we want to ensure that lightning is not allowed to strike twice.

“That in view of securing the future of our communities, we urge and will mobilise all the clan and community youth leaders under our command to support the emergence of Olorogun David Edevbie as the flag bearer of the PDP.

“That we urge all well meaning delegates from our communities, wards and local government areas who are concerned and desirous of the development and growth of our communities to cast their vote for Olorogun David Edevbie at the PDP primaries and also work to turn out bloc votes for him and the PDP during the general elections.

“That our position is in support of the recent endorsement of Olorogun David Edevbie by the revered Urhobo Progressive Union, UPU, who has adopted Edevbie as the consensus candidate of Urhobos in the Peoples Democratic Party.

“That our decision to endorse Olorogun David Edevbie is born out of our desire to see that Delta State is transformed to take its pride of place.

“That as a state which is hailed for consistently churning out intellectuals and in consideration of the capacity for delivery on the job, we want our very best to emerge as our State Governor, and Olorogun David Edevbie is the best amongst all the aspirants.

“That we recognize the fact that all other aspirants have their individual strengths but, for the sake of achieving a Modernized Delta as a model in Nigeria and Africa, we appeal to them to take into cognisance this collective wish of Deltans and rally round Olorogun David Edevbie”, the communique read.

Those who spoke at the event held at the Martin Elechi Hall of the Oaks hotel and suites Ughelli, included the president general of Ndokwa National Youth Movement- Onwubolu Benjamin, Vice President of Isoko National Youth Assembly- Comr. Osu Johnny, with Comr. Kanabor Ovie Duke and Hon. Tete Augustine speaking for the Urhobo and Itsekiri nation.

The communique was signed by the leaders of the forum, delegates from the G5 Ethnic nationalities and the student representatives.

Speaking on behalf of the student leaders, NAPS president- Comr. Anidi Samuel said they decided to throw their weight behind David Edevbie because after careful analysis of all aspirant, his modernization plans stands tall above the rest.

Anidi said the student leaders will go back home to canvass and appeal to the delegates of the PDP to vote for Olorogun David Edevbie and when it’s time for the general elections mobilize massively for him.