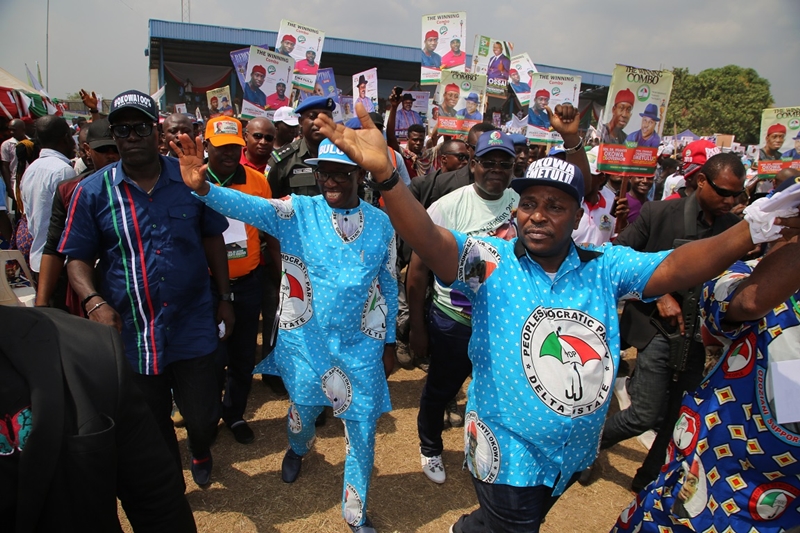 Confident that his administration has recorded a lot of achievements that will earn the Peoples Democratic Party (PDP) victory in the forthcoming general elections, Delta State Governor, Senator Dr Ifeanyi Okowa has urged members of the party to mobilise the people to collect their permanent voters cards (PVCs).

The governor who made the call on Wednesday, January 16, 2019 at campaign rallies of the PDP at Aboh, Ndokwa East; Kwale, Ndokwa West and Ogwashi-Uku, Aniocha South local government areas of Delta State, stressed that an impressive PVC collection would give rise to increase in the number of votes at the polls.

“We thank you for coming out emmasse to receive us, it shows that Delta is PDP and, PDP is Delta State; there are still some voters cards that are yet to be collected, mobilize our people to utilise the window offered by the Independent National Electoral Commission (INEC) for everybody to collect their voters cards,” he said, adding, “we want every Unit, Ward, and every local government area to beat its previous record in delivery of votes.”

He asserted, “we know we will win but, we should win with very high margin; you have listed the roads we have constructed, those we are constructing, the empowerment programmes we have done, when we make promises, we keep to our promise and in the next four years, we will surpass our achievements, vote for all the candidates of the PDP. “

“This is not the time for disagreement, it is time for work as a one united family because, the best results come from local government areas where there is unity,” the governor who was accompanied to the venues of the rallies by his wife, Dame Edith, his Deputy, Barr. Kingsley Esiso and top politicians in the state said.

At Aboh, he specifically said, “I relate with my people, I am at home with my people, the good people of Delta State, I enjoy staying in the state; together, we have worked for more than three years and we deserve to thank God for the success stories; even when you are at home, praise the Lord.”

“We are going on campaign from local government to local government, our people are campaigning from Ward to Ward, Unit to Unit, door to door, we must be armed with our voters cards that is what we will use to choose good governance for another four years, collectively, we can,” the governor who sang and danced with Deltans at the venues of the rallies said.

Those who spoke at the venues of the campaigns include Chief Godwill Obielum, Senator Patrick Osakwe, Chief Jerry Ossai, Chairman of the party, Barr, Kingsley Esiso, Director General of the Campaign Council, Hon. Funkekeme Solomon, Chairman of the Campaign Council, Prof. Sam Oyovbaire, among numerous others listed the achievements of the governor which will be reciprocated by Deltans through massive votes for candidates of the PDP in the elections.

They listed the roads constructed in the local government areas, achievements in the health sector, education, empowerment programmes, among numerous others and stated that Deltans will vote for all the candidates of the PDP from Alhaji Atiku Abubakar as President to the candidates for House of Assembly positions.