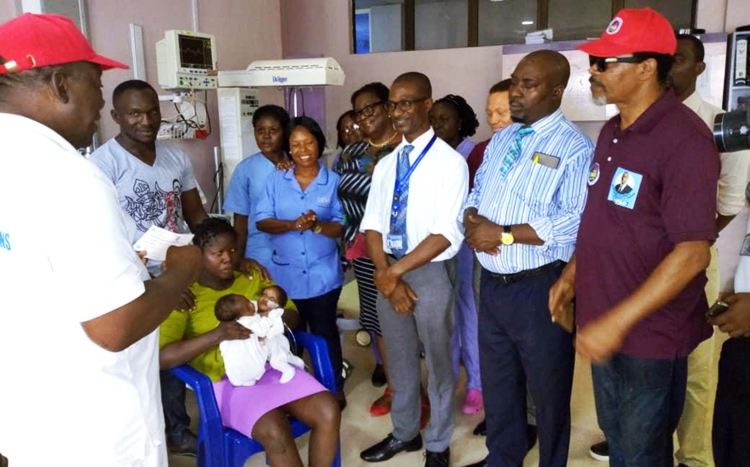 In line with his promise to assist the conjoined twins delivered recently at the Delta State Teaching Hospital, Oghara, the Delta State Governor, Senator Dr Ifeanyi Okowa has presented a cheque worth N2.5m for their upkeep and medical expenses while awaiting the separation surgery.

The State Commissioner for Health, Dr Mordi Ononye presented the cheque to the parents of the conjoined twins on behalf of the State Governor, Senator Dr Ifeanyi Okowa at the neonatal section, of the teaching hospital in Oghara, Ethiope West Local Government Area.

The Commissioner said that the information of the birth of the conjoined twins and the poor financial state of the parents, made the state governor to promise to intervene adding that the cheque presentation was the fulfillment of the promise, assuring that that more assistance would come from the state government.

He thanked all members of staff who had played one role or the other in keeping the twins alive and urged them not to rest on their oars but continue to be committed to their work with the view to providing quality health care to all that will patronize the hospital.

Dr Ononye said that the governor was committed to making the teaching hospital a place of excellence, assuring of massive renovation of the hospital would commence soon.

Expressing gratitude to the governor for his kind gesture, Dr Onome Ogueh, Chief Medical Director (CMD), DELSU, Oghara said that the support of the governor had been wonderful adding that since assumption of office as CMD, the Governor had been very responsive to the requests made by the institution and for that the hospital was indebted to him.

He commended the Commissioner for the role he played that led to the quick response in the presentation of the cheque.

Dr Ogueh informed the commissioner that a medical team from the United States of America known as Hospital for Humanity was currently on a visit to the hospital and they have come to see how the hospital could develop services to babies with congenital heart disease such as what the conjoined twins were presently experiencing.

He said that the hospital would work with them to ensure that advanced health care services were effectively delivered in the hospital for the betterment of Deltans and residents in the State.

The parents of the conjoined twins, Mr and Mrs Peter Amaje, thanked the governor and the commissioner for his financial assistant and assurances, and prayed that God should richly reward them.

According to the hospital authorities, the twins were born on 2nd May this year through Caesarean section and at birth weighed 4.6 kg and currently weighing 5 kg combined.

The authorities said that the MRI done had not been able to clearly delineate the exact degree of joining but that it had been established that there was a level of joining in the heart.

The father of the twins is a corps member serving in Onicha-Uku, Delta State while the mother is a full time house wife.