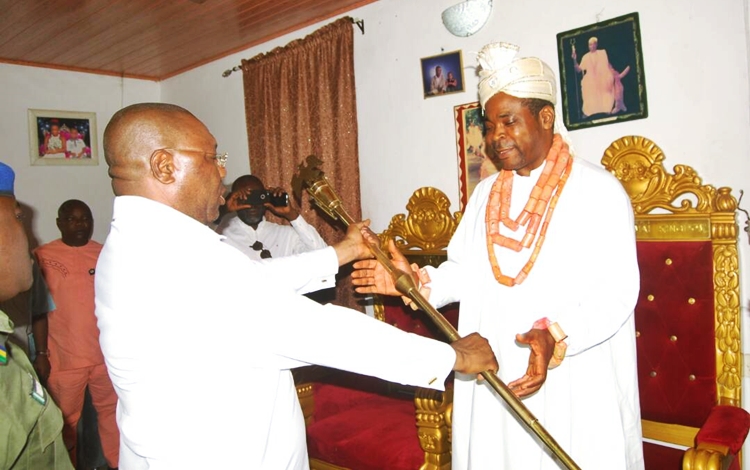 Amidst tight security provided by battalions of the Nigerian Army, the Police, the Directorate of Security Services, DSS, the State Government through the Office of the Deputy Governor, Barr. Kingsley Otuaro on Wednesday, June 201, 2018 issued Staff of Office to Chief Paul Ifenazuchie as the substantive king of Amai Kingdom despite ongoing legal dispute on the rightful individual for the throne.

This action has been perceived by some quarters in Amai Kingdom as a huge betrayal of the confidence they had in the State Government, noting that despite legal obstacles and court injunction directing against the issuance of staff of office to any of the parties involved in the legal battle of who is the rightful person to ascend the throne from Umuekum (one of the quarters which make up the kingdom), in Ukwuani Local Government Area, was flaunted by the Deputy Governor.

It could be recalled that Ndokwa Reporters in an exclusive report on Wednesday, reported the pending government decision of the Okowa led government to disregard the court order, and issue the staff of office, after a successive attempt by the government counsel in the last court appearance for the trial Judge to vacate the order.

However, according to our reporter who witnessed the ceremony, condoling off, of all the exit and strategic places in the town was perfectly carried out by the security operatives before the arrival of the Deputy Governor, Barr Kingsley Otuaro, which according to him was a security procedure to avert any crisis from the angry members of the community, as it was observed that there was no sign of merriment in the town as regard the ceremony, which ordinarily would attract merriment.

While the deputy governor called on the people to leave in harmony, as the only way to achieve development, the only person that spoke was the Chairman of the Council, Mr Chwukudi Dafe, and a brief ceremony of handing of the staff was done, the leadership of the development Union was conspicuously absent, as traditionally, it is the place of the chairman to welcome the visitor to such ceremony.

At the end of the ceremony, which was a brief one, the hordes of Army vehicles had to escort the Deputy Governor out of the community through the Amai-Obiaruku route, while his other motorcade, like the press crew, and others have to return back to Asaba through the Amai-Ogume-Kwale route.

Other sources in the community confided in our reporter that a lot of pressure was put on the youths of the community to stand down any violent actions that will bring further pain to the community.

Meanwhile, after a long absence of the wife of Chief Paul Ifenezuchie, before his installment to lead the people of Amai, was sighted during the ceremony, as it was reported that she flew in from the United Kingdom to witness the formal ascension of her husband as the King of Amai, and for her to take her proper place as the Queen of the Amai Kingdom.

Reacting to the development, those interviewed called the action of the state government a sign of betrayal, and vowed to work against the government in during the 2019 election.

“After working for Governor Ifeanyi Okowa to win election in 2015, this is how he is paying us.” One of them reacted.