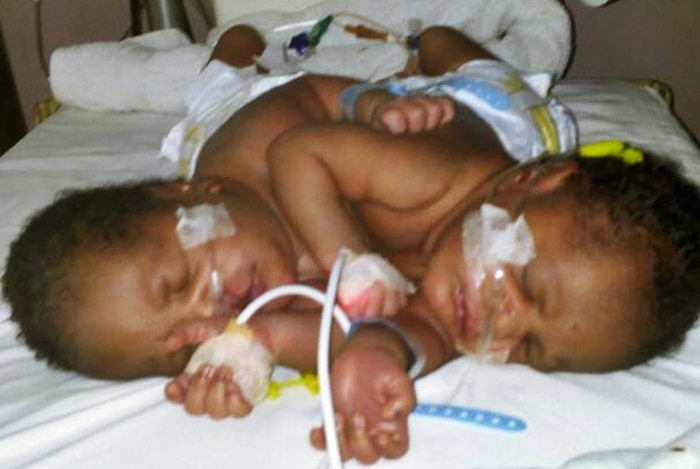 The Conjoined Twins Delivered at DELSUTH

… Babies in Good Condition, not separated yet.

Former Secretary to Delta State Government, Comrade Ovuozourie Macaulay, has called on government and well meaning Nigerians to come to the aid of the conjoined twins in order to save their lives.

He commended the hospital management for their medical feat with a call on them to intensify efforts on the costing.

Medically referred to as ‘Siamese twins’, a rare medical occurrence and first of its kind in Delta State, the conjoined twins were delivered at 10.30am on Wednesday, May 2, 2018 through a Caesearean section in DELSUTH, Oghara.

A visit to the hospital on Friday May 4, 2018 revealed that the twins, both boys, were delivered to a Youth Corps member father and a full time house wife mother.

A medical expert in DELSUTH who begged anonymity due lack of authorization, confirmed the report, stating that the management were yet to cost the separation surgery.

She disclosed that antenatal scans so far, revealed that the babies have two kidneys, two hearts but one liver, adding post natal scan is yet to be conducted to ascertain the true position.

According to her, the babies both weigh 4.6 kg at birth with one umbilical vein, adding that they are both on oxygen and stable except for a slight recorded case of hypoglycemia, low blood sugar. She said twin two has cleft lip.

She also disclosed that American expatriates would be flown in for the surgery, but hinted, however, that the parents apparently lacked the wherewithal to finance the cost effective surgery.

Records show that Siamese twins occur in 1 out of 189,000 births, most commonly found in Africa and Asia. The condition comes with the babies sharing same organs in some situations as they join at different portions of the body.

At the time of filing this report, all efforts to reach the Chief Medical Director of the hospital proved abortive.