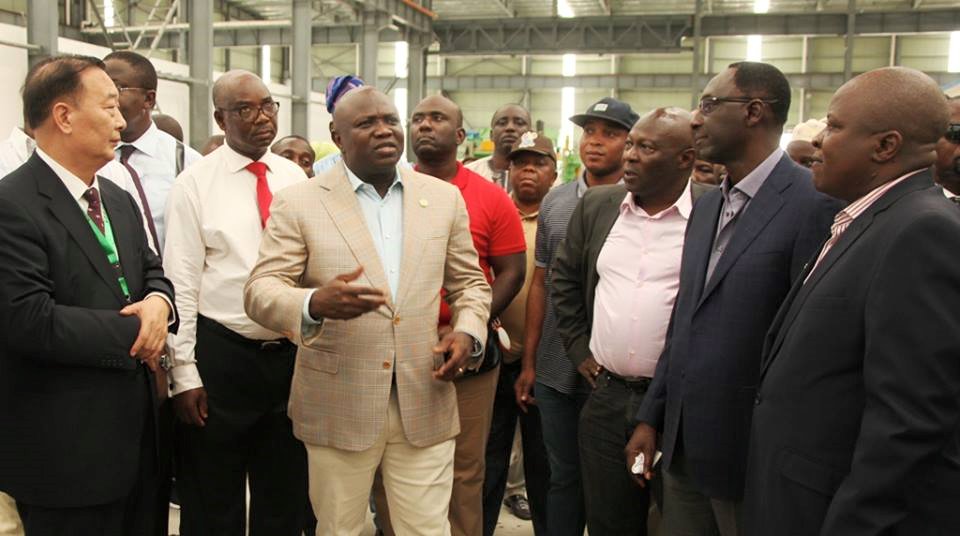 Investments into the Lekki Free Trade Zone (LFTZ) an emerging business hub in the Lagos axis of the State has risen to over N100billion in the last 10 years.

Chairman of Lekki Free Zone Development Company, Mr. Abiodun Dabiri who disclosed this at the weekend while giving progress report on the Zone to State Governor, Mr. Akinwunmi Ambode, said more investors have indicated interest in coming to set up businesses in the Zone.

Dabiri said the recent efforts by the Governor especially in the change of baton in the management of the Zone has yielded positive results over the last one year.

He said with the massive investments coming into the Zone as well as interests from new investors, there was need for the road network to be expanded to accommodate the expected high influx.

While responding, Governor Ambode said his administration in partnership with its Chinese partners will commit a sum of $62million in the next six months as part of its counterpart funding to advance the ongoing development of the Lekki Free Trade Zone (LFTZ).

He assured that the Government was totally committed to addressing the challenges and ensuring the project is actualised.

“I want to assure that our financial commitment to LFTZ will be improved in 2017, that is, we will accelerate to quickly clear our outstanding counterpart funding for the zone.

“In essence, we expect that in the next six month, we should be having an investment of over $60 million. I believe that when we invest our share of the fund and China Africa Lekki Investment Limited (CALIL) does, it will bring a major development for the Zone,” he said.

The Governor said that putting the fund at the Zone at a time when Nigeria was gradually easing its way out of recession would not only improve infrastructure and boost development, but will also help attract more investors to the Zone.

He said over $6billion has been invested in the LFTZ in the last few years, with Dangote Group providing a lion share of about $4billion.

Governor Ambode said: “Over $6 billion has been invested in the Zone in the last few years with Dangote share in the lump sum at $4 billion and we have a land space of over 16,000 hectares of which just a portion of it is activated.

“We are all aware of the investments by Dangote Group and the China Africa Lekki Investment Limited (CALIL), had done as it concerns the partnership they signed with the Lagos State Government. And this partnership made the company own 60 percent while Lagos own 40 percent.”

Governor Ambode also assured that work would commence on the Lekki Deep Sea Port next month, saying that it was also a critical infrastructure that would attract more investors into the Zone and ensure return on investment.

“With the ongoing construction of the Seaport, Airport and others, it is obvious that a single road isn’t sufficient for the Zone.

“It is now clear that we have to dualise the Lekki-Eleko Road beyond the Zone in order to withstand the influx of vehicle that will be making use of the road to access the Zone. With this, we will be able to sustain the investments in the area,” the Governor said.

He expressed optimism that with the Lekki Deep Sea Port, Dangote Refinery and Lekki Airport coming on board, the Lagos East axis would witness massive economic turnaround within the next two years.

Besides, the Governor also commended residents for the peaceful atmosphere witnessed in the Zone in the last one year, which according to him was crucial to the development recorded in recent time.

He said about 800 hectares of land would be handed over to the Zone within the next six months for further development.

“The overall interest is for the residents of Lagos because aside that we will grow the GDP of the state, this place will help to reduce unemployment and capacity for the future,” he said.