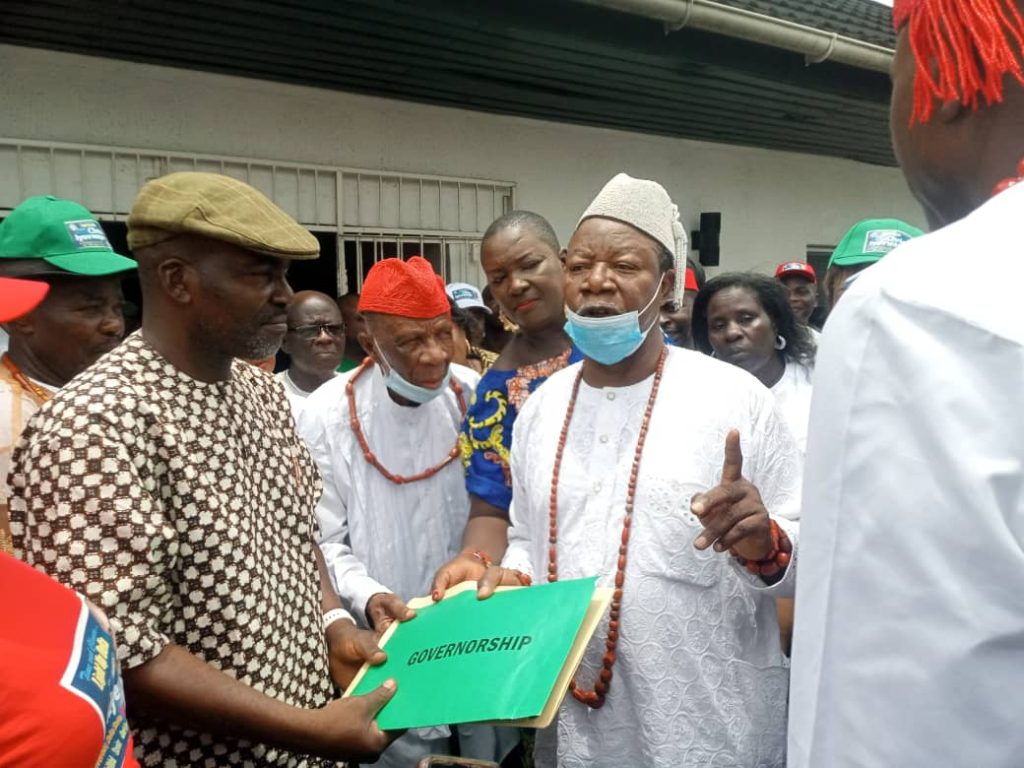 A leading Delta governorship hopeful under the platform of the Peoples Democratic Party, PDP for the 2023 gubernatorial election, Deacon Chris Iyovwaye has declared that if he scales through the primary of the PDP and elected as the governor of the state, that he will create enabling environment and attract industries to employ millions of youths and other vibrant workable class in the state.

Deacon Iyovwaye made the declaration, Monday April 4, 2022 in Warri Delta State when his friends, the Progressive Men, Women and Youth of Isoko, Urhobo Unity Forum, Youth Arise and Deltans in Global Diaspora and supporters gathered to present a purchased governorship and expression of nomination of interest form to him, urging him to join the race and  begin consultation for the governorship seat of the state.

The Delta Governorship hopeful said as part of his plans to energise the state, some riverine communities never had power failure with the use of the turbine where natural gas converted to electricity, he added that in Delta 12 mineral resources abound but not yet tapped noting that those minerals are not in the exclusive list but will be harnessed into proper economic use if he’s elected into the government number one seat come may 2023.

The PDP governorship aspirant has also vowed to industrialise Delta and make the state more visible with development in the next year of his administration if elected, and promised better development plan for the youth.

While commending Governor Ifeanyi Okowa for his achievements, Deacon Chris Iyovwaye, said he will build industries to engage the over 65 percent youths of the state, arrange new and modern security system to attract more investors to the state, setup Bolt and Nut industry which will cost less than 150 thousand Dollars to establish as well as channeling resources to development of all sectors of the state economy human capital development healthcare welfare for the elderly and affordable quality education.

He appreciated his friends and the Progressive Men, Women and Youth of Isoko Urhobo Unity Forum,  Youth Arise and  Deltans in Global Diaspora as well as his supporters for believing in him to become the governor of the state, assuring them of becoming a good governor for a new song of  development  for all Deltans.

President General, Uvwie Improvement Union, Chief Hope Erute, while presenting the purchased form on behalf of the Progressive Men, Women and Youth of Isoko, Urhobo Unity Forum, Youth Arise and Deltans in Global Diaspora and supporters to Deacon Chris Iyovwaye to contest the 2023 governorship in the state, disclosed that they are picking a sellable aspirant that can cut across the state, noting that Deacon Chris Iyovwaye is a man that fears God and is capable to come salvage Delta State in 2023.