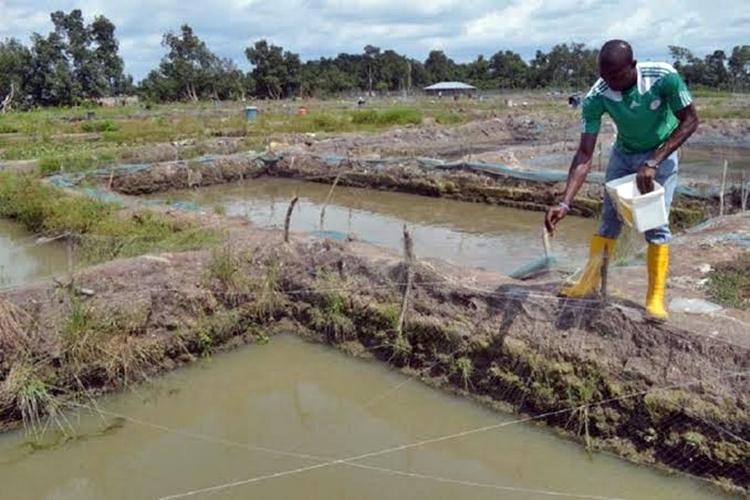 …To Approach EFCC, DSS, Others For Prosecution.

The great fortunes of Camp 74 Fish Farm, Anwai, Delta State popularly reckoned as a major hub for Cat Fish production in Nigeria may be consumed by sustained internal crisis arising from the alleged diversion of funds, grants and other forms of subsidies donated to it by various levels of government and foreign organizations.

This boat rocking situation was revealed by aggrieved farmers who sternly condemned the age long exclusion of the true fish farmers from all forms of support offered to Camp 74 Fish Farmers Association by the Delta State government, the federal government and other agencies.

This is coming on the heels of the alleged embezzlement of over N42 million compensation and bailout funds presented to Camp 74 Fish Farmers by the Delta State Government through the SSG, Barr. Ovie Agas which was published in The Pointer Newspapers of November 20, 2018.

Speaking to Newsmen in an interview at Camp 74 Fish Farm, Anwai, the leader of the aggrieved farmers, Mr Samuel Ekwo lamented the age long diversion of farm inputs and financial support by a Cabal created by the erstwhile chairman of the association, Mr Nwanneka Upright which has held sway in the present administration of Mr Chuks Ogbotobo.

Mr. Ekwo stated that the pains of the farmers were heightened following the loss of thousands of Fishes to the harsh impact of flooding which swept through the farms and hinging their hopes on the various compensations to revive their production, were neglected by the said cabal who in their usual manner diverted millions of naira into their private pockets.

“As a farmer, I lost over 1300 Fishes to the harsh reality of nature after spending N1,170,000 (One Million, One Hundred and Seventy Million Naira) in the purchase of Feeds and others. Within this six months period, all farm inputs given to Camp 74 Fish Farmers by the different agencies were never distributed to the target farmers.

“These inputs and subsidies were all allegedly diverted into private agro shops owned by this cabal who constantly frustrated the efforts of the true fish farmers in getting the assistance from government.”

Continuing, Ekwo disclosed that, “we decided to grant this public interview following the failed internal appeal to the exco to amend the injustice melted on farmers and disburse accordingly the grants and inputs destined for Camp 74 Fish Farmers.

“The sum of N42.8 million which was given to Camp 74 Fish Farmers in November, has been diverted for private use. They bought exotic cars, opened Feed shops, went on shopping spree and over 174 Fish Farmers were allowed to languish in their loss with a dime.”

Confirming the allegations by the leader of the aggrieved fish farmers, Mr Chuks Adumali in a separate interview, emphasized that the Mr Upright who led the Fish Farmers for Four years, is still the de-facto chairman as the committee led by Chuks Ogbotobo has fused with the existing cabal to deprive the true farmers of their rights.

“Ogbotobo is a stooge of Upright. They have instituted and sustained corruption in Camp 74 and the glory of the Fish Farm is swiftly fading away. Over 174 Farmers are currently wailing in loss and the compensation meant for them has been hijacked by portfolio farmers who do not even know the exact location of Camp 74 Fish Farm.” Adumali stressed.

In their resolve, the aggrieved farmers through their leader, Mr Samuel Ekwo, revealed that due to the high level of embezzlement of funds and diversion of subsidies and farm inputs, the farmers are currently engaging the services of reputable legal services to petition the leadership of the Camp 74 Fish Farm and other private individuals linked to the injustice, to the Economic and Financial Crimes Commission (EFCC), ICPC, DSS, and the Nigeria Police for investigation and prosecution.

He added that plans are also on ground to engage in a protest to Delta State Government House, Asaba where other crimes marshaled by the Upright and Ogbotobo led exco will be presented to Governor Ifeanyi Okowa.

Ekwo further advised the Delta State Government and other agencies to forthwith stop dealing with the past chairman of the farm, Mr Nwanneka Upright, submitting that he is an impostor who has been severally accused of diverting farm inputs and funds donated to the Fish Farmers.