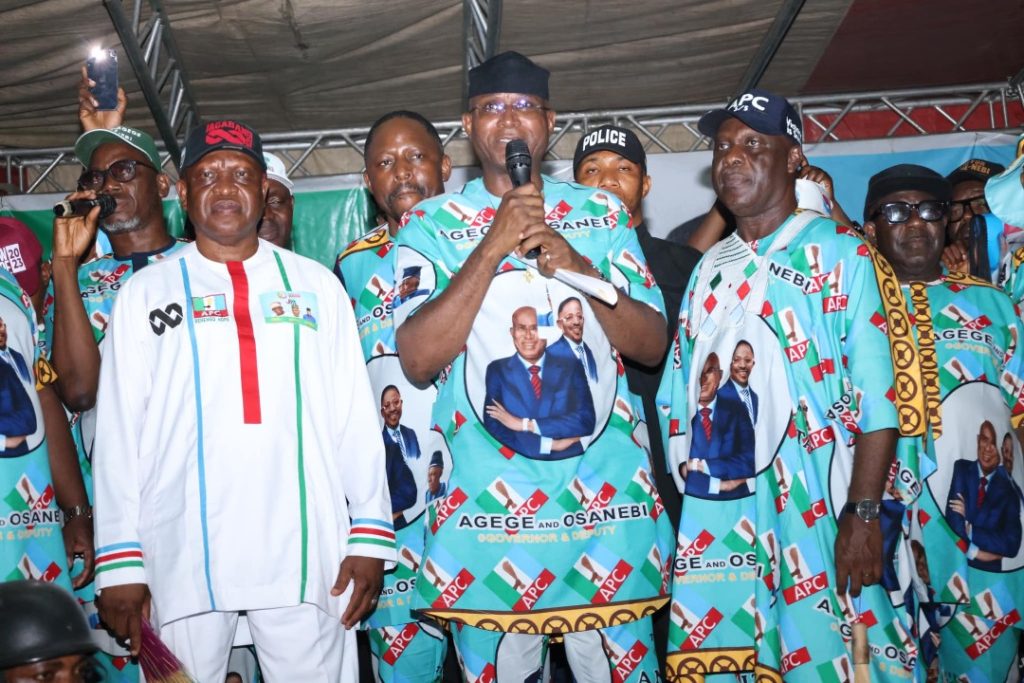 The governorship candidate of the All Progressives Congress (APC), Senator Ovie Omo-Agege, has assured the people of Uwheru Kingdom in Ughelli North Local Government Area of the state that his administration will take proactive steps to resolve the incessant attacks on local farmers by suspected herdsmen in the area.

Omo-Agege also assured that an APC-led government will tackle the perennial flooding which has led to destruction of farmlands and other means of livelihood of the people Uwheru and other communities in the state.

He also vowed to complete the now abandoned Arhawharien/Okparabe bridge projects which connects riverine communities in Ughelli South local government area when elected as the governor of the oil-rich state.

The Deputy President of the Nigerian Senate spoke on Monday during the continuation of APC ward-to-ward campaign to Ewu-Urhobo, Uwheru and Evwreni in Ughelli South and Ughelli North LGAs of the state.

Omo-Agege said as one of the first step to end the frequent killings resulting from herders/farmers crisis in the state, his administration would appoint ombudsman who would directly report to him on the issue.

According to him, “When the women leader was speaking, I heard it when she was talking about the issue of herdsmen. The challenge I’m aware of it. I’m fully aware of it, but I assure you I have a solution.

“That era where they would be depriving our people, raping our women, driving them from their farms that era will be over.”

Meanwhile, the APC governorship candidate has eulogised late Senator Pius Akpor Ewherido, who died in 2013 as a serving senator, as a statesman who brought quality representation at the National Assembly to Delta State.

Omo-Agege, flanked by his deputy, Rt. Hon. Friday Osanebi; Campaign Director-General, Elder Godsday Orubebe, said the late Senator Ewherido’s political ideas and aspirations for a better Delta, Urhobo Nation and Nigeria would be sustained and achieved through him as a governor.

Commending the Ewherido’s family for supporting his political career, Omo-Agege assured that he would do for the people of Ewu, what the late senator would have done for them as a lawmaker and governor.

Omo-Agege, who also visited the graveside of the late Delta Central senator, said, “Just like my brother said earlier that there is no time we will do campaign in Ewu without visiting the home of our late leader, Senator Pius Akpor Ewherido. Here is the foundation of APC in Delta State.

“The vision of our brother who has gone to rest with the Lord. The ‘Gogorogo’ himself. The vision of Urhobo to move forward, the vision of Delta State to move forward is the same vision that we all share. And it’s very important that everyone knows that we were ‘comrade-in-arms’ while he was here with us. And ever since his departure, the Ewherido family has been very good to me.”

The younger brother to the late senator and chieftain of the APC in Delta, Mr. Emma Ewherido, commended Senator Omo-Agege for keeping in touch with the family, and urged him to sustain the legacies and aspiration of the former Delta Central lawmaker.