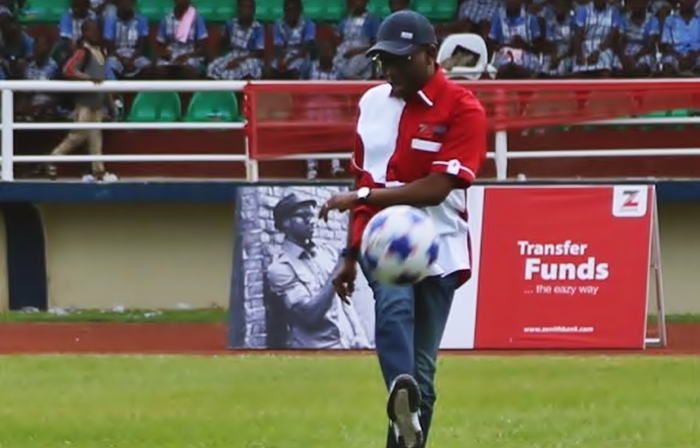 It is not for nothing that Delta State is called the Big Heart state. The fairly young state created in 1991 is endowed with several natural resources such as kaolin, lignite, hydrocarbons, etc. just to mention a few.

Lying in the mangrove forest, the state is also blest with very arable soil, whereupon can be grown all types of crops throughout the year and which can support a variety of flora and fauna. What makes Delta State tick however is not in its wide array of natural resources, it is the rich human resources, Deltans who given the right opportunity, would always excel in any and every field of human endeavor.

Among these areas where the human resources of Delta state has been positively deployed, sports easily stand out as one. There can be no meaningful discussion on sports in Nigeria where the contributions of Deltans are not recognized.

Whether it be Athletics or Table tennis, soccer or judo, Deltans have always held out strong by winning laurels at both national and international events. But the achievements of the state did not come by happenstance or good luck. It was the product of years of investment in the sector. This is where the immediate past administration failed to consider when it relaxed reaping the fruits of the Ibori administration huge investment in sports while failing to think about its sustenance.

Senator Okowa met a state declining in its legacy as the centre of excellence in sports. The several stadia built by the Ibori administration had fallen into utter abandon and there was a shift away from motivation for our sportsmen and women. This situation did not deter Governor Okowa who saw the restoration of sports to its pride of place as a priority. But like the articulate politician and strategist that he is, Okowa has decided to start by engaging the grassroots through the revival of the Delta State Sports Festival which had been comatose for about a decade now.

The Sports Festival which saw athletes representing the 25 Local Government Areas competing for honours was a celebration of the rich sports heritage of Delta State and served as an avenue for identifying and grooming the athletes of tomorrow. The Festival took place at the Ozoro Polytechnic Stadium, an ultramodern Olympic size Stadium built and commissioned by Senator Okowa.

Indeed, the giant strides of the Delta State government under the leadership of Senator Okowa has broken new grounds and in the words of Solomon Dalung the Minister of Sports, Governor Okowa has taken grassroots sports notches higher.

Not resting on its oars, Senator Okowa has flowing from the success of the Delta State Sports Festival inaugurated a high powered committee charged with the responsibility of grooming the discovered talents and to prepare them for the African Senior Athletics Competition.

The committee led by Chief Solomon Ogba is yet another testament of the commitment of the Okowa administration to the restoration of Delta State to its pride of place in sports.

In the past one month also, the Delta state government in partnership with Zenith Bank PLC resuscitated the Delta State Principals Cup competition. This event which involves all public and private Secondary Schools trading tackles in soccer went moribund due to the neglect by the immediate past administration.

It is indeed a new dawn for grassroots sports under the Okowa administration. The finals of the competition which took place on the 20th of May, 2017 was as glamorous as the entire competition. Seated in the capacity crowd at the 14000-seater Ozoro Polytechnic Stadium included CAF Executive Committee Member and President of the Nigerian Football Federation (NFF), Mr Amaju Pinnick and Nigeria professional footballers in the likes of Henry Nwosu, Victor Ikpeba, Victor Igali, Edema Fuludu, Ndubuisi Okoesieme, Ifeanyi Udeze etc. There were also several traditional rulers, representatives of Zenith Bank and other top government functionaries.

Governor Okowa used the occasion to restate his vision in the sports sector. According to him, “I believe that we have all had fun this afternoon, this is a dream come true, I believe that we will continue in this stead so that the energy of our youths will be used for gainful ventures,” He added with a feeling of nostalgia thus, “We are looking forward to the school sports competitions like we used to have in General Ogbemudia’s administration in the old Bendel State. “We will continue to develop our sports facilities, we will look at how to organise sporting competitions at primary school levels, our dominance in sporting events will remain for a long time to come because, we will always discover talents through these events.”

It has been the consensus of critical stakeholders that the drive of Governor Okowa evinces a clear character of a purposive leader which is commendable and worthy of emulation. Sports being a unifying point could be deployed to arrest militancy, restiveness, cultism and other antisocial activities amongst the youths.

What is happening in Delta State Sports sector is nothing short of a revolution which we only hope to be sustained.

The Nigerian Maritime University as an Answer to the Niger Delta Question
OKOWA: The POLITICS of DEVELOPMENT and The DEVELOPMENT of POLITICS (1)