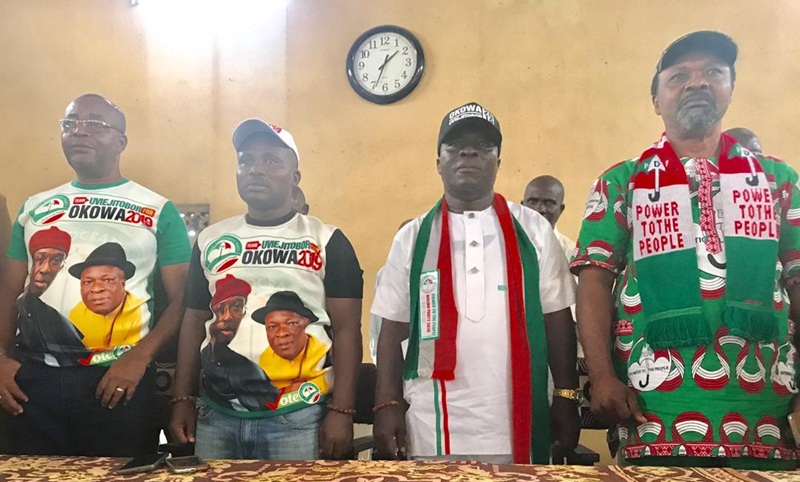 The Member Representing Udu Constituency in the Delta State House of Assembly, Hon. Peter Okagbare Uviejitobor has again called for massive votes for the PDP candidates in the forthcoming general elections.

Hon Uviejitobor who is the PDP flag bearer for the March 2nd 2019 State House of Assembly election, Udu Constituency, made the call when he led a high powered PDP campaign team in the local government area to Ovwian, Aladja and Orhuwhorun communities.

The Lawmaker stated that the visits were in continuation of the community to community campaign for PDP candidates in the forthcoming general elections, stressing that the Okowa’s led PDP administration in the state has brought lots of positive development to the people.

Flanked by the Chairman, PDP Udu local government area, Prince Sam Ughujowhovwo, the Chairman Udu local government council, Chief Jite Brown and other party leaders, Hon Uviejitobor maintained that the second tenure of Dr Ifeanyi Okowa will witness greater development in the state, urging Deltans not to cave into the deceit of some desperate politicians who make promises that they can never fulfill.

The Lawmaker who is the Chairman, House Committee on Lands, Survey and Urban Development, highlighted his numerous achievements as the representative of the Udu Constituency in the state legislature and commended Governor Okowa for his support and interest in the development of the council area.

Hon Uviejitobor paid glowing tributes to other major stakeholders in the Delta State project and the people of Udu for their love and support in moving the local government forward.

Stressing that to who much is given, much is expected, Hon Uviejitobor maintained that Dr Okowa never denied the Udu people what is due them both in the area of appointment or siting of projects.

He urged electorate to vote for him and all the PDP candidates for the elections, expressing optimism of victories for PDP candidates at the polls and more dividends of democracy in the council area.

The Chairman, PDP Udu local government area, Prince Sam Ughujowhovwo said the intervention of Okowa in Udu council area was so overwhelming and charged the people to reward him with their votes for PDP.

The Chairman Udu local government council, Chief Jite Brown advised that no single vote should leave Udu to another party, saying that the statement 5 over 5 was not just a slogan but a must achieved target already set by Deltans for PDP.

The spokespersons of Ovwian, Aladja and Orhuwhorun communities acknowledged the need to vote for candidates that will attract greater development to the localities and pledged their support to Hon Peter Uviejitobor and all he represents.

Others who spoke commended Hon Peter Uviejitobor for his quality representation in the state house of Assembly and pledged to reelect him for another tenure.

They also vowed to reelect Governor Okowa as Governor, Atiku Abubakar for President and Hon Evelyn Oboro and Samuel Mariere for National Assembly.

The high points of the visits was payers for the victory of Hon Peter Uviejitobor, Governor Ifeanyi Okowa and other PDP candidates at the polls.