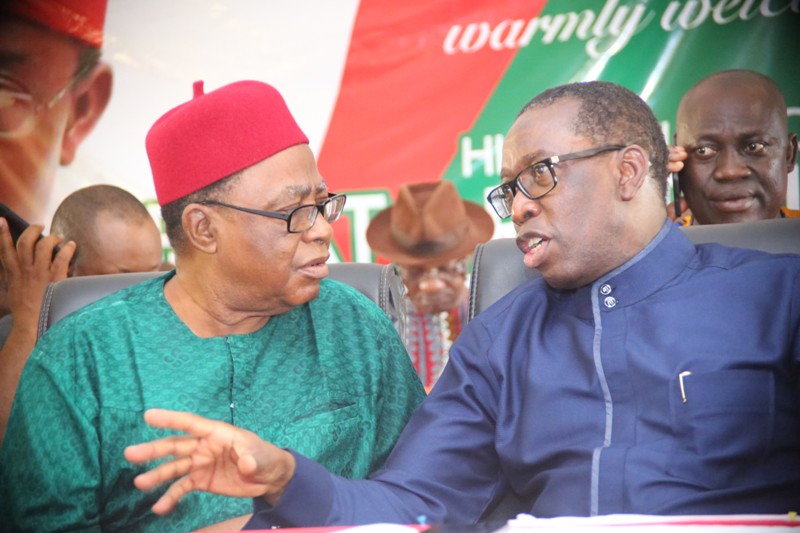 … As Peter Okocha, Others Return To The Party

With less than one month to the primaries of the Peoples Democratic Party (PDP), Delta State Governor, Senator Dr. Ifeanyi Okowa has said only popular persons should emerge as candidates of the party to ensure that the party has landslide victory in the 2019 general elections.

Governor Okowa at a Delta North PDP stakeholders’ meeting held at Agbor stated that despite the popularity of the PDP, the wish of the people must prevail by fielding most acceptable candidates for the party.

At the meeting billionaire businessman, Chief Peter Okocha who contested the governorship position on another party’s platform returned to the PDP where decampees from the All Progressive Congress, Accord Party and others, also, declared for the PDP.

“Continue to reach out to those in other political parties and bring them back to the PDP, we are one; as you go for the primaries, ensure that you give us the best for the purpose of having landslide victory in the elections, give us popular candidates, candidates that can win elections,” the governor said.

Governor Okowa re-echoed the call by the state Chairman of the party, Chief Kingsley Esiso that aspirants should search their conscience and if they are not sure of victory, they should step down for popular candidates.

“If you examine yourself properly and you know that you cannot make it, don’t bother to buy nomination form, it is not honourable to be referred to as former aspirant,” the governor asserted.

He commended those who have returned to the party and urged the chairmen of the party at the local government levels to always consult before taking decisions, reiterating, “there must be consultation with all relevant stakeholders in decision taking, party chairmen cannot be autocrats, decisions must be by consultation because, everybody in the party is important.”

Governor Okowa also used the occasion to take a swipe at those who has criticised the hosting of the African Senior Athletics Competition, observing that the multiplier benefits of hosting such a continental event will continue to be reaped for a long time.

Chief Okocha had said he did not decamp from the PDP but only left to show disenchantment following what transpired at the gubernatorial primaries of the party few years ago, stating, “three weeks ago, I returned to the party, the PDP, let us join hands with the Governor and make Delta a better place.”

Chairman of the PDP in Delta North Senatorial District, Hon. Moses Iduh had in an address, commended Governor Okowa for his developmental strides, observing that the PDP continues to record successes in its activities.