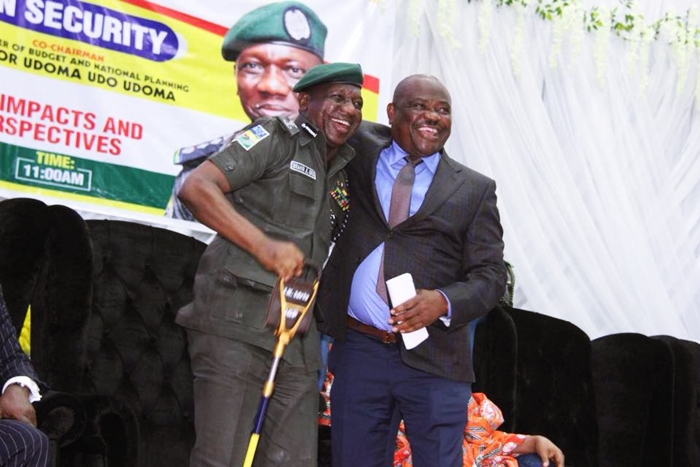 Rivers State Governor, Nyesom Ezenwo Wike has called on the Inspector General of Police, Alhaji Ibrahim Idris not to allow politics to negatively affect the fight against insecurity.

The governor advised the Inspector General of Police to allow State Commissioners of Police to work with state governors, as that is the only way that security can be promoted.

The governor said: “You (IGP) must allow the Commissioners of Police to work closely with their respective governors to improve the security architecture.

“Politicization of security is a major crime. Commissioners of Police work with Governors on the basis of the governor’s relationship with the powers that be. This should not be. Let’s not bring politics into fighting crime. A kidnapper does not care about the political party of his victim. Nobody is immuned from insecurity, irrespective of status”.

The governor said all stakeholders must collaborate to improve security across the country.

He said: “Let me further reiterate the point that as the nation’s number one Police Officer, the buck on civil security stops at the table of the Inspector General of Police and he is as accountable to the public as any other public office holder. “

Governor Wike said: “I wish to assure you that Rivers State under my watch will continue to support and collaborate with the Nigerian Police and other security agencies as partners to combat insecurity not only in Rivers State but also across the nation.”

The governor urged the Inspector General of Police to look into complaints by State Governors, as they are important to improve security.

Recall that Governor Wike in recent weeks have provided evidence to the Police High Command on the involvement of the Rivers Special Anti-Robbery Squad in kidnapping and armed robbery.

He said peace, security and national stability are prerequisites for development in any social polity, pointing out that no governor will support insecurity in his state.

Governor Wike noted that denying the people their right to electoral choice leads to insecurity. He urged the Electoral Umpire to ensure the conduct of free and fair elections.

He said unless the right thing is done by the authorities , hundreds of security summits will not enhance security in the country.

Earlier, the Inspector General of Police, Alhaji Ibrahim Idris said that the security summit is aimed improving security in the country.

He said the Public Lecture Series will help the Police understand the security challenges of the different geo-political zones.

The Public Lecture with the “Insecurity: Socio-economic impacts and conflict resolution perspectives” witnessed goodwill messages from the Governors of the South-South and the Minister of Niger Delta .