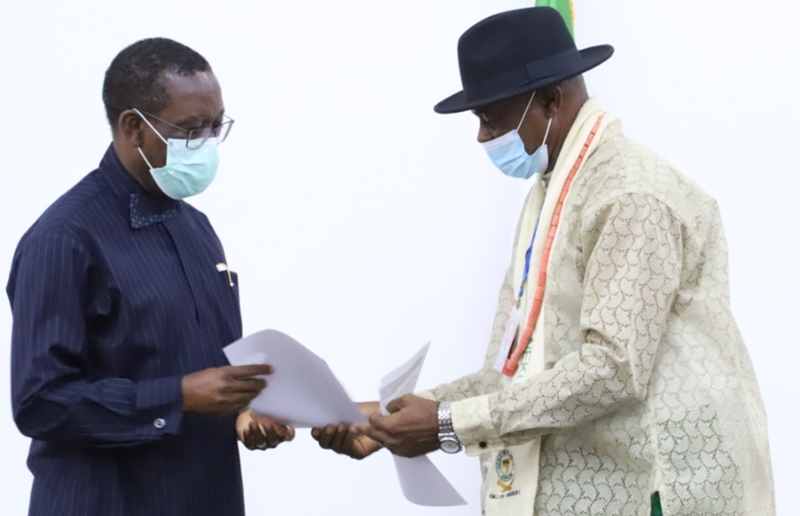 …assures completion of Beneku Bridge by 2022

Governor Ifeanyi Okowa has said that the Covid-19 pandemic was the key setback to the commencement of the multi-billion dollar Kwale Industrial Park project situated in Ndokwa West Local Government Area of Delta State.

The project which saw Governor Okowa lead an entourage of state officials on a road show to China to meet potential investors, has failed to materialize since its announcement in 2019.

Okowa disclosed this at a meeting with Ndokwa Neku Union (NNU) led by its President General, Brig-Gen. Mike Ndubisi (retd) when they paid him a courtesy visit on Wednesday, June 16, 2021 at Government House, Asaba.

He said that the Kwale Industrial Park project was stalled by the failure of major firms enlisted in the project to turn up as a result of COVID-19 pandemic in their respective countries, adding that payment of compensation for the land had commenced.

The governor, however, disclosed that the state government would ensure that the project was resuscitated because of the dividends the state and its citizens would derive from the project when it came to fruition.

“I have taken note of the various comments and requests that you have made. Concerning Kwale Industrial Park, we are very serious-minded concerning it although we have had some setbacks and I must truly acknowledge the setbacks that we have had.

Delta State Governor, Dr Ifeanyi Okowa (Center) on an Inspection Tour at a Chinese Factory in Shenyang, China in view for the development of Kwale Industrial Park, October 2019 (Pics: twitter.com/iaokowa)

“But, just upon our return (two months later), when the investor was supposed to visit, Corona Virus came and since then, all other companies that we needed, none of them has accepted to leave China to even visit Nigeria, not to talk of progressing our talk.

“It has been a very major setback for us. That visit was made in October/November, 2019. We even went with some of your sons on that trip and we have been trying to make contacts but we are having some issues.

“We are trying to look for some other ways because, generally, investments have been very tough coming into the country since the COVID-19 pandemic started. We are still making moves to see if we can track them. So, a lot is being done.

“We are actually not resting on our oars; we will continue to see what we can do because we know that that park is viable because of the gas availability within the park and very close to the park.

“So, we are still on course on that, just that we had a very major setback,” he said.

On the multi-billion naira Beneku Bridge across Ase River to link Ndokwa West and Ndokwa East Local Government Areas of the state, Governor Okowa assured that it would be completed in early 2022 in line with contractual agreement, adding that the project was very dear to him.

He also told the people that the Obiaruku/Umuebu road project was captured in the 2021 budget, and that Utagba-Unor/Ndemili road would be considered in the 2022 budget.

He called on oil companies operating in Ndokwa land to give priority attention to the basic needs of their host communities.

Okowa further assured the delegation that all their requests would be looked into with a view to addressing some of them within the limits of available resources.

Speaking earlier, the President General, Ndokwa Neku Union, Brig-Gen. Mike Ndubisi (retd) said their visit was to thank the governor for the socio-economic and infrastructure development he had attracted to Ndokwa land coupled with the appointment and empowerment of Ndokwa sons and daughters.

The PG had also appealed to the governor to consider the establishment of a campus of any of the state’s tertiary institutions in Ndokwa area, execution of the Kwale Industrial Park project and completion of some projects at different levels of completion in Ndokwa.

He also urged the governor to prevail on multinational oil companies operating in the area to fulfill their corporate social responsibility.