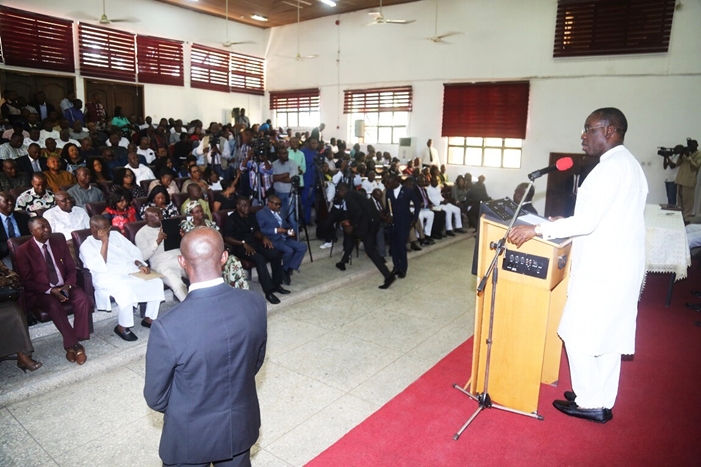 Delta State Governor, Senator Dr. Ifeanyi Okowa has said his administration did not sack staff of the Delta Line as speculated by some persons.

Making the disclosure Wednesday, June 217, 2018 during the second session of the 2018 quarterly media parley with Journalists in Asaba, the Governor disclosed that following the commercialization of the state-run transport company, more than 100 staff would be absorbed by God Is Good Motors, the new management of the company.

“We have already paid four months arrears before the take over and four more months will be paid and they are also to be paid a disengagement allowance which is being worked on now and they opted to move out probably because of the allowance which they are entitled to receive and thereafter any one of them who wishes to continue with the company will be subjected to interviews, so, nobody was sacked because I know that some of them are going to be re-engaged and those who will be useful will be put to work and no form of nepotism will be allowed,” the governor said, asserting, “nobody was sacked,  rather they were relived on their own accord, and over 100 workers will be re-engaged by the new management.”

He continued, “I am sure that Delta Line is going to come up well because, with the plans that are on ground, we want the company to run in such a manner that as a government, and as a people, we can be proud of it and we can be sure that that when passengers are in these vehicles they can be rest assured of their safety and security; so, in the next few months, we are going to see brand new Delta Line buses, efficiency and quality of service will be the new order for the company.”

Governor Okowa who was happy with the progress made with the Delta Line, disclosed, “that Delta Line had over 400 drivers for just 200 vehicles, was totally alarming and it turned out that the functional vehicles were only about 80 and that functionality was failing because most of the vehicles were not doing well, and the remaining were just in mechanics.”

The governor urged critics of the intention to commercialize Delta Line to get their facts right, stating that the transport company “is a commercial venture and it is supposed to make money for itself and possibly also for the state government through some dividend payment, but, unfortunately over time, government has continued to pour out money into that place, I have witnessed the capitalization of Delta Line three times in the past, and after some time we came back with millions and millions of debt and we could not continue in that manner and we could not allow the mistakes of the past to repeat itself, so, we thought that the best thing was to bring in a private partner who can run the company efficiently because one; is the provision of the services that you expect that company to provide and two; is sustainability of that venture to ensure that it does not go bankrupt.”

He gave assurance that the interest of Deltans and the state were always uppermost in taking decision by his administration and the people will get good benefits from the partnership between God Is Good Motors and Delta State government.