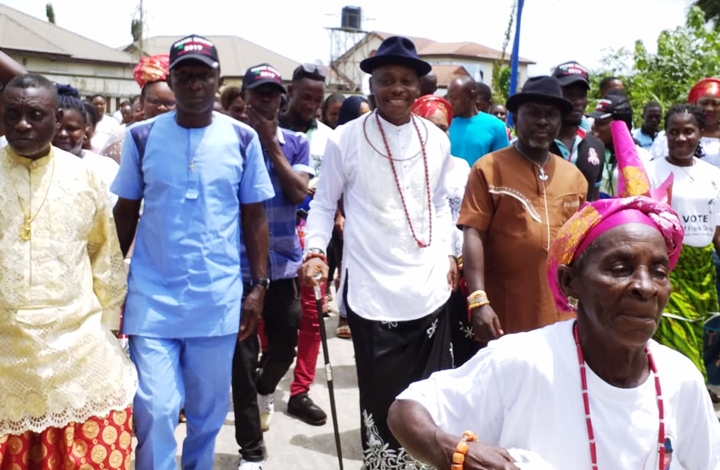 A former Commissioner for Housing and Environment in the state, Chief Frank Omare has said that his experience in governance is an added advantage in his quest to represent the people of Warri South West Constituency in the Delta State House of Assembly, under the platform of People’s Democratic Party (PDP) in the 2019 elections.

Speaking in Ogbe-Ijoh Kingdom at the Palace of the Monarch when he visited for royal blessings over his aspiration, Chief Omare said he has all it takes to provide quality representation to the people of Warri South West.

Ascribing to himself as a bridge builder and detribalized person, Omare declared “I have built bridges of friendship, unity, love and oneness across the Ijaws and Itsekiris of the Warri South West Constituency and even beyond”, adding, “the principle of fairness, justice and equity made it expedient for all political actors in Warri South West to support my ambition as I had over the years gave all in working for the victories of others.”

Chief Omare who is the Director-General, Special Programs to the Delta State Governor, Senator Dr. Ifeanyi Okowa, commended the development strides of the Governor and promised to work with him to attract more dividends of democracy to Warri South West Constituency.

He intimated the Royal Father and his Palace Chiefs that he had consulted widely with critical stakeholders and majority of them gave their blessings, saying, “they saw the need for me to serve the people of Warri South West in an elective position”.

Omare further told the Traditional Ruler that of the three persons from Ogbe-Ijoh kingdom vying for the same position, he is the most qualified and appealed that they step down and support him to Victory.

“If elected, I will consolidate on the achievements of my predecessors as well as introduce new lease of life to governance in Warri South West for peace, progress and growth of the local government area”, Chief Omare assured.

He condemned all sort of blackmails being posted in the social media about aspirants in the forthcoming elections and advised those involved to desist from such, said in all positions he had held in the past he had always made Warri South West, particularly Ogbe-Ijoh community proud.

The traditional ruler, Monbene  III, Ama-Okosu of Ogbe-Ijoh Warri kingdom, in his remarks called for unity and love among aspirants of various political positions, reminding them of the need to shun bitterness in their campaigns.

While giving his royal blessings to Chief Omare who he described as a notable son of Ogbe-Ijoh kingdom, the royal father urged him to go about his consultations peacefully.